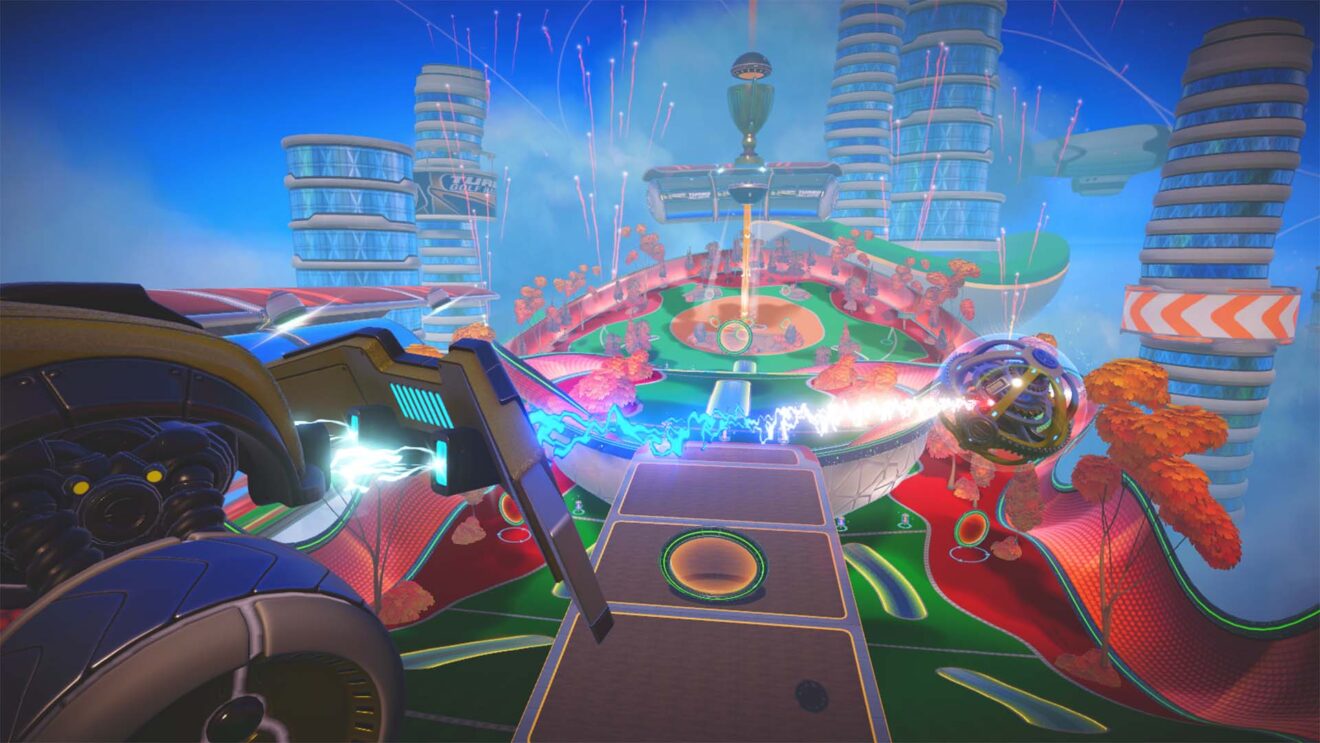 It’s astounding to me that it took over 7 years for another game to do Rocket League but with a sport other than soccer. Sure, Rocket League shouldered some of that burden itself, adding new modes based on hockey, basketball, and even football. But developer Psyonix never put enough time or resources into fully building up those modes into something that could rival Rocket League’s main attraction, which is a shame. Don’t get me wrong, I still love Rocket League and play it every week, but I can only really stomach a few matches at a time before getting bored of the same game I’ve been playing for the better part of a decade.

Thankfully, developer Hugecalf Studios has arrived on the scene with Turbo Golf Racing, ready to do what Psyonix won’t. Turbo Golf Racing is basically “Rocket League but golf.” It’s a physics-based sports game in which you use a car to hit a ball. Instead of trying to score a goal against your opponent, you’re trying to be the first person to sink the ball into the cup on each course, hence the “racing.” As with Rocket League, the idea is so simple and so obvious that you have to wonder why no one’s done it until now.

I got to play a preview version of Turbo Golf Racing, which is launching into early access on August 4th, so this is not a review. I won’t even call it full impressions, since I haven’t yet played it against other opponents. Instead, I’ve only tried the solo mode, which is essentially time trials. In other words, I can’t recommend Turbo Golf Racing one way or the other. But what I can say is, even though I only played a small percentage of the game, I had a ton of fun.

If you are a dedicated Rocket League player, you will probably feel right at home on Turbo Golf Racing’s courses. Hugecalf has obviously been taking notes. You’ll notice a lot of similarities right away: ball cam will help you keep track of the ball, collecting and managing boost is key to your success, and you can even fly. After custom mapping my controls, the muscle memory I’ve built up playing Rocket League over the last seven years translated perfectly to TGR.

Of course, sometimes that got me in trouble. One thing you can’t do in TGR is flip in any direction you want. Instead, double-pressing the jump button will launch you forward. You can sort of do a front flip by leaning the car forward as you fly through the air, but it’s not advised to do this too often as you will lose some of your momentum. You absolutely cannot side flip into the ball like you can in Rocket League, a fact that took me some time to get used to. Starting out, I’d often try to side flip the ball into the cup, only to shoot myself away from the ball at lightning speed. This is not a criticism, mind you; one of the things that I appreciate about TGR is how it subtly distances itself from its obvious inspiration and forges its own identity.

Everything about Turbo Golf Racing’s gameplay felt good. The driving is arcade-y and responsive with just enough momentum to manage that it doesn’t feel too easy. There’s a lot of variety in how you can approach hitting the ball, too. A handy directional arrow shows you exactly where the ball will fly depending on your angle of approach, and hitting it on the side will give it some spin, which can be both useful or unintentional. You can even tilt the front bumper of the car to either send the ball high into the air or keep it more grounded. The fundamentals are very sound, and lining up the perfect shot will careening towards the ball is equally straightforward and challenging.

Turbo Golf Racing is essentially a kart racing game after all, with the added complication of having to escort a ball through the course. I can only imagine how that will be complicated further with other players not only trying to get their own balls in the hole, but also trying to stop you from doing the same. Part of the challenge, at least in solo mode, is finding the best line. Hitting the ball into a turbo pick-up will automatically fill your boost tank, as will driving on top of specific parts of the course. This is golf, so sand traps and the rough can completely halt your ball’s momentum and slow your car down, too. There are also rings that will launch your ball forward at an incredible pace, placing it in advantageous positions.

I do have a few concerns, and one of those is longevity. While I’ve yet to get bored of the courses that are in the game, I do wonder if TGR offers the replayability of Rocket League. One of the main draws of both racing and golf games, arcade-y or otherwise, is its course variety. So far, there are three courses with ten holes (or tracks, whatever you want to call them) each, and while that might sound like a lot, I do think playing them over and over will get boring. Hugecalf obviously plans on adding more levels after the game’s early access launch, but it’s unclear when we will get new levels and how many we will get when we do.

Speaking of early access, I’m concerned that Hugecalf is hedging its bets. As an early access game, Hugecalf asked us not to give it a full review, and we wouldn’t have anyway as that’s our policy. But it does kind of feel like Hugecalf is waiting to see if the game takes off before fully committing to supporting it. Hopefully, TGR’s day-one launch on Xbox Game Pass will give it enough momentum to warrant more content, but it’s still a notable concern of mine. I also have to wonder if Hugecalf’s servers are ready for the influx of players that the game is about to experience, and if its multiplayer and party features will be ready for those who want to play with their friends. On a similar note, I’m also not a huge fan of the fact that there’s already a season pass ready to go with unlockable cosmetics and an in-game store. That feels a bit like putting the cart before the horse, especially because this is already a game you have to buy, not a free-to-play title.

As far as gameplay concerns go, I only really have one, and that’s the “core” system. There are both active and passive cores. Active cores are special abilities that you can activate after a cooldown, while passive cores give you a buff. I only unlocked a few as I played, and some of them give significant advantages. One active core, for example, let me magnetize my ball to my car, which saved me several times from smashing it out of bounds. While the cores give players a fun way to customize their experience, I’m worried that a clear meta will be established. If that’s the case, then the entire system falls apart, because having one right answer means experimenting is pointless. Part of the genius of Rocket League is in the purity of its design—you have a car, a ball, and a net. Sure, there are a few different hitboxes, but that’s really the only variation. Having powerful abilities might just muddy TGR’s design, though I don’t plan on taking it too seriously as a competitive game, so my concerns could be moot.

From what I’ve played, Turbo Golf Racing satisfies a desire for more physics-based, car-focused sports games. I’m excited to play it with my friends and see if it will end up in my regular rotation. I think it will, at least for a little while, but how long it will stay there is unclear. My friends and I have been playing Rocket League for seven years. I don’t know if Turbo Golf Racing has that kind of longevity—but I hope it does.