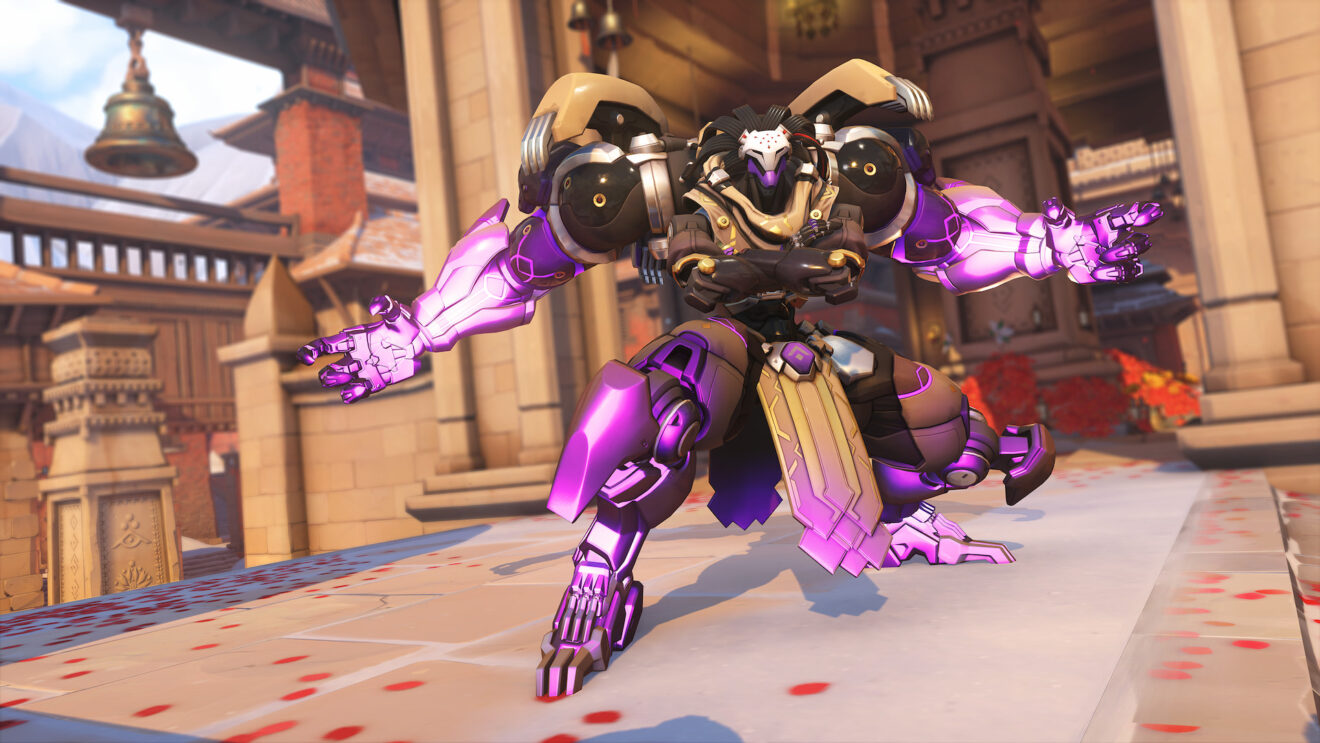 According to the blog post detailing the tank, Ramattra will have an Omnic form and a Nemesis form. Ramattra’s main weapon is the Void Accelerator staff that he uses in his Omnic form. The staff’s primary fire shoots out a stream of nanites that act as projectiles but have no damage drop-off. This means you will have to lead your shots but that it’s still viable at range. The Void Accelerator’s secondary fire creates a temporary barrier that blocks enemy damage. The barrier also has a health pool, which looks a little bit higher than Sigma’s barrier, so the enemy can destroy it if they concentrate enough firepower on it.

Ramattra’s Nemesis form swaps out his staff for his gigantic fists. When going into Nemesis form, which is a cooldown ability that lasts for 8 seconds, Ramattra has two new abilities: Pummel and Block. Pummel throws out powerful, short-range energy punches that actually go through enemy barriers like Reinhardt shields and Winston bubbles. Meanwhile, his Block will have Ramattra put up his arms and block incoming damage from the front, though he’s still vulnerable on the sides and in the back. Players can switch between Pummel and Block on the fly, making it a useful tool for pushing through choke points or fighting back a dive from D.Va or Winston.

Ramattra’s other cooldown ability, which he can use in either Omnic or Nemesis forms, is his Ravenous Vortex. Ramattra throws this out as a projectile, and when it explodes, it creates an area where enemies trapped in it get slowed, grounded, and damaged. This looks like a powerful tool against aerial attacks from Pharah and Echo, or keeping Baptiste from leapfrogging out of danger.

Finally, there’s Ramattra’s Ultimate, Annihilation. Ulting will immediately put Ramattra into his Nemesis form and send out waves of nanites to damage players within a certain radius around him while also reducing incoming enemy damage by 50 percent. The tricky bit with Annihilation is that there’s no time limit to it as long as it’s currently damaging an enemy. This basically gives players facing Annihilation three choices: kill Ramattra (which will be hard with that damage reduction), run outside the range of the attack, or die. As with the rest of Ramattra’s abilities, Annihilation seems like a really strong tool for creating space for your team.

Ramattra comes to Overwatch 2 when Season 2 launches on December 6th. Players who purchase the premium pass will instantly gain access to the new tank, but players on the free battle pass track will be able to unlock him as they could with Kiriko. It’s just unclear how far into the battle pass players will have to grind this time around. Before then, Blizzard will release a Season 2 gameplay trailer on November 29th and will reveal the new map on December 2nd.

Overwatch 2 is available for Xbox, PlayStation, Switch, and PC.