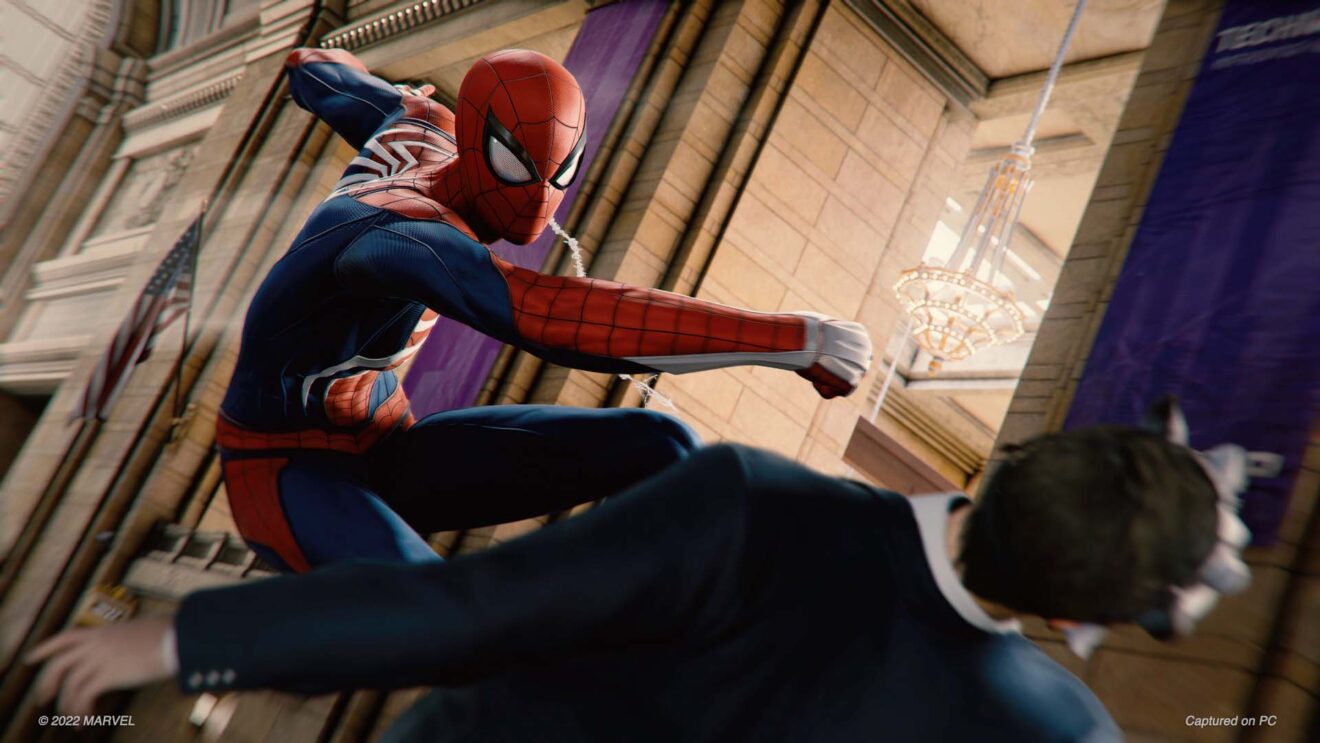 One of the best aspects of reviewing the PC port of Marvel’s Spider-Man Remastered has simply been having an excuse to return to the game. I didn’t get to review it when it originally launched in 2018, but I agree with pretty much everything that Josh said in his review. Playing it again in 2022, I’m amazed by how much fun it still is to swing around New York City, beat up supervillains’ goons, and take photos of landmarks while flying through the air.

I’m not going to completely re-review the game here, so if you want some kind of starred rating for a game we scored four years ago, you can look elsewhere for that—or you can just read Josh’s review (and his thoughts of the DLC while you’re at it, since that’s included in the Remastered package).

That’s because playing Spider-Man on PC, thanks to the new port from Nixxes, gave me the same level of basic enjoyment as its PS4 counterpart. Whether that’s a good thing or not depends on what you want out of this port.

Don’t get me wrong: I would absolutely rather play Spider-Man on my PC than on my PS4, so if you’ve never played the game before or want to revisit it four years later with a computer that can handle it, playing on PC is hands down the better way to experience it. But given the choice between the PS5 and PC versions, I would still prefer playing on console.

For background, I played Spider-Man on a PC sporting an AMD Ryzen 7 2700X 8-Core Processor, an AMD Radeon RX 5700 XT GPU with 8 GB of VRAM, and 32 GB of RAM. It’s not a top-of-the-line PC by any means, but it’s no slouch and easily fits within Sony’s recommended specs. Bearing that in mind, I wasn’t disappointed with Spider-Man’s performance, but I wasn’t blown away either.

Playing on medium settings in 1440p with AMD FSR 2.0 on (after a patch, which is why these impressions are a little late), my framerate would often dip below 60 frames per second when swinging through the city, especially as I got closer to street level. Sometimes, I would hover right around 90 FPS before dropping dozens of frames in an instant.

Weirdly enough, reducing my resolution to 1080p or lowering the graphical settings didn’t make that much of a difference. I definitely couldn’t play on high or very high settings without taking a major performance hit, though that was to be expected, and I wasn’t able to use any ray-tracing since my GPU doesn’t support that feature. Still, even on medium settings in 1440p, Marvel’s Spider-Man still looks great, and the performance was fine.

As someone that’s mostly a controller player but has started to prefer gaming with a keyboard and mouse, I personally found the game’s KBM controls unusable. I’m not saying that they are good or bad, just that I really didn’t enjoy them. Web-swinging felt fine, but combat felt incredibly clunky. Not only did that make it unfun to play, but it also broke the immersion of being Spider-Man, the most acrobatic and fluid crimefighter in comics. That being said, being able to play as the web slinger with my Xbox Elite Series 2 controller was an absolute dream.

As much as I enjoyed being able to use my preferred controller, I wouldn’t choose to play on my PC—which is decent but far from top of the line—over PlayStation 5, even if that means having to play with a DualSense that has a loose R2 button. Of course, someone with a far better rig might feel differently, but compared to my machine, the PS5 gives me more enticing options. As far as the lighting is concerned, the Performance RT mode on the PS5 version looks so much better than the low shadow settings my PC was able to produce without ray-tracing, and the difference in textures was negligible. Plus, the ability to play the game in (mostly) 4K at (mostly) 60 FPS with the normal Performance mode on my big 4K TV (not to brag) would still be preferable to playing on my decently sized 1440p monitor (again, not bragging).

All this is to say that if you haven’t played Marvel’s Spider-Man yet, Nixxes has done a fine job bringing the game to PC. If you can’t get a PS5, this is a decent option. But was I blown away? No, and since I have Sony’s latest console available, I would probably just play it on that. Still, what playing the PC port reminded me of is how good Marvel’s Spider-Man is. If you can overlook some questionable narrative decisions and Spider-Man’s propensity for beating nonviolent drug offenders senseless in the name of the NYPD, Marvel’s Spider-Man Remastered is well worth playing, whether you’re on PC or PS5.