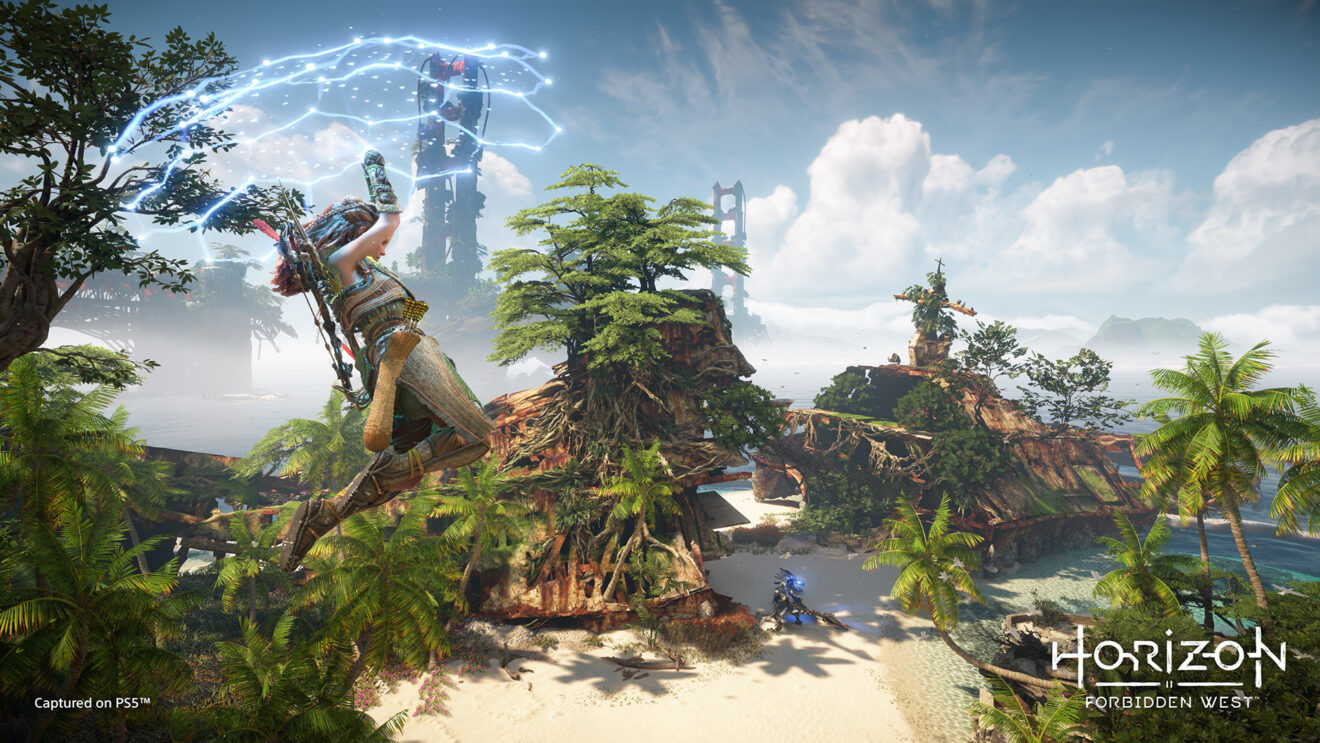 Sony and Guerrilla Games have offered a more in-depth explanation of the new abilities and gadgets at Aloy’s disposal in Horizon Forbidden West, with two designers explaining their goals for the gameplay changes in a new PlayStation Blog post.

That includes the most detail yet on the Pullcaster and Shieldwing, two new gadgets that debut in the May gameplay trailer.

“The Pullcaster is a mechanical wrist-mounted device with two separate functions. The first function is a grapple mechanic…. When grappling, the player can activate the launch—throwing them into the air,” explained lead systems designer David McMullen. “The second function of the Pullcaster is a winch, meaning the player can dynamically manipulate, move and destroy the objects in the environments. Think about pulling a hidden loot chest from a ledge, or tearing open a vent to create a new climb path.”

The Shieldwing, which appears to function similarly to Link’s paraglider in The Legend of Zelda: Breath of the Wild, is designed in part to make getting down from vantage points less of a hassle. “This tool is invaluable with having so much more verticality, where backtracking down the same trail holds less of an appeal as on the way up,” McMullen said.

The blog post also detailed the less prescriptive approach Zero Dawn will take to climbing and traversal, with Aloy able to free climb rocky terrain without predefined handholds. In conjunction with the new tools, players should find more than one approach for tackling the same gameplay challenges. “Our traversal design decisions were always in service of increasing dynamic interactivity with the world around you,” McMullen said. “Traversal puzzles won’t always have a binary solution; we encourage players to experiment and have fun with the new tools.”

On the combat front, lead combat designer Dennis Zopfi offered some insights into the new ways Aloy will gain strength—and use it when fighting foes. “One entirely new concept in Horizon Forbidden West is the workbench, where you can upgrade and strengthen weapons and outfits,” Zopfi said. “This unlocks new perks, mod slots, skills, and offers a bigger degree of customization, resistances, and new abilities for players!”

Zopfi went on to note that the skill tree, returning from the first game, has been “completely redesigned… with additional tracks and skills” and a greater focus on synergy with perks tied to gear. Another focus was rewarding players for switching between melee and ranged combat during a fight. “A new example of a skill that does this is the Resonator Blast, where you charge up the spear with melee hits and when fully powered up, the energy can be placed on enemies (humans and machines alike) and followed up with a projectile—resulting in a big damaging explosion!” Zopfi said.

Finally, Zopfi also touched on the new Valor Surge feature, which gives Aloy access to 12 different attacks that charge up throughout combat. Players will unlock and upgrade these through the skill tree, with three levels per Valor Surge. A higher-level Valor Surge attack will take longer to charge but will be more powerful. “This level is shown on the purple bar you could see during the gameplay trailer: You’ll receive more Valor—or charge up that bar—through skillful actions such as hitting weak spots on enemies or removing components. In the [May] video you could see Aloy perform the Radial Blast on the burly Tenakth warrior,” Zopfi said.

What we didn’t get much of today, however, is new footage. Instead, Sony highlighted a few clips from the same gameplay segment it showed back in May. A few of the GIFs do appear to be new, however, offering a look at different approaches to the same content.

Below is the best example of that bunch. In the older trailer, we saw Aloy take on a group of human enemies in this environment. Today, we get to see her duke it out with machines, using the Pullcaster, Shieldwing, and a Valor Surge in one quick-but-dense segment of gameplay:

To see the rest of the clips, you can check out the full blog post.