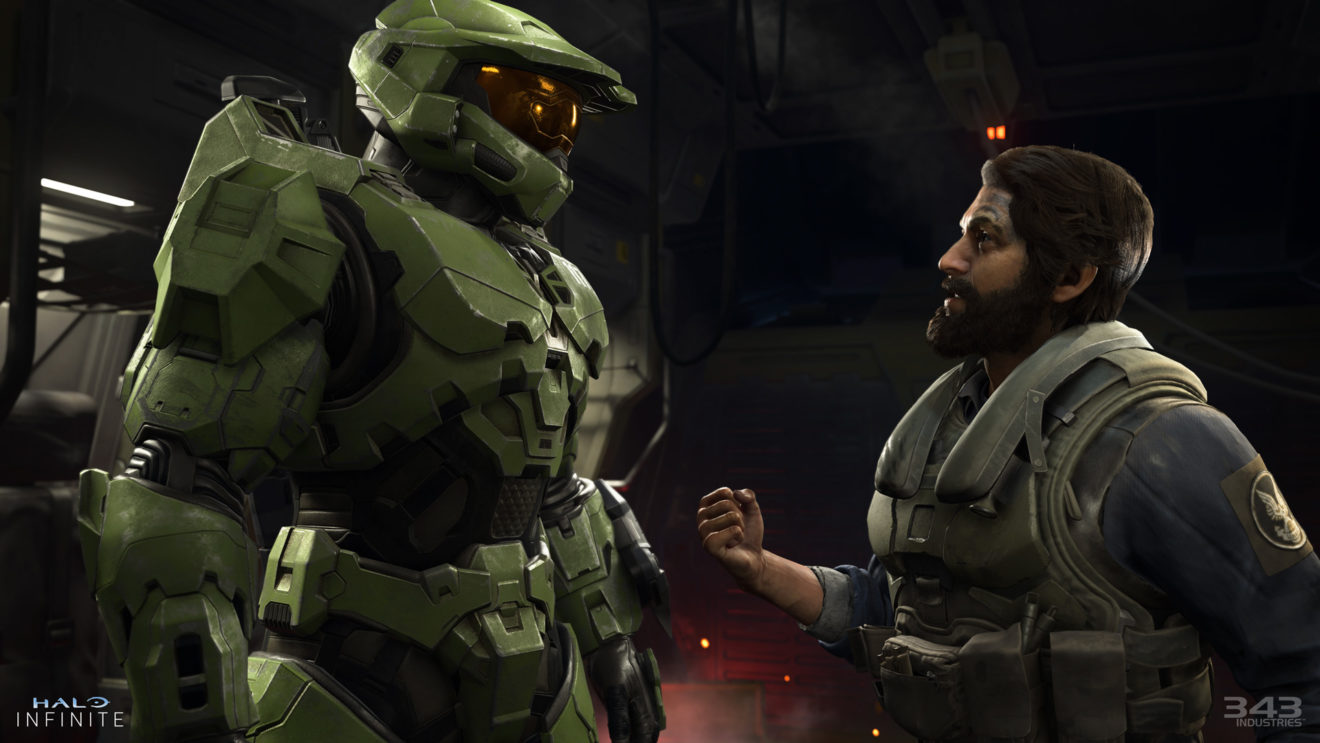 Here’s everything we’ve learned about the Halo Infinite campaign

Following yesterday’s Halo Infinite gameplay reveal, we were invited to a digital event to get a more in-depth look at what was shown (which is still very much a work in progress) and ask the developers a few questions.

For context, 343 Industries specified that yesterday’s demo, which showed Master Chief and The Pilot (that’s what 343 is calling the bearded supporting character for now) crash-landing on a section of the Forerunner Ring after getting shot down by Banished anti-air cannons, takes place in the middle of the game. The E3 2019 trailer that showed the Pilot finding Chief is actually the beginning of the game, and Halo Infinite‘s story will sort of piece together the mystery of what happened to Chief and why the Pilot found him that way, as well as continuing the story from Halo 5.

When I asked if that means there will be parts of the game that aren’t set on the Ring that was shown off in the demo, a 343 developer responded that there is some “space stuff” at the beginning of the game, but the bulk of it will take place on that ring settlement, and the driving force of the game’s narrative will be the Banished’s War Chief Eschraum’s personal vendetta against the Chief.

343 has been calling Halo Infinite a “spiritual reboot” of the series, but that doesn’t mean that it will leave fans who have dedicated themselves to the franchise’s lore in the lurch. As stated, Halo Infinite “100 percent a sequel” to Halo 5, but they also want to both recapture the feeling that fans had when they first played Halo: Combat Evolved, as well as let new fans “understand the feelings those [longtime] players had.” The goal, 343 said, is to use this title to build towards the future of the series and introduce new mysteries for fans to uncover. Succinctly stated, it is a “love letter to all Halos.”

As far as the map itself is concerned, 343 reiterated that all the areas you see in the game “are places you can go.” Exploring those places will uncover new “upgrades” and “equipment.” The Drop Wall and Grappleshot that were shown off in the demo are two examples of the kinds of equipment you can find, though it seems like the Grappleshot will more or less be a necessary item that you get early on.

Along that same line, I asked what “upgrades and equipment” might mean for the game’s co-op. 343 has stated that Infinite will feature 4-player co-op as well as couch co-op, but I wondered whether players that are missing certain equipment can still jump in and out of their friends’ games, even if their friend is further along in the story.

According to the developers, online co-op will function as it has in previous Halo titles, except that cross-play will be available, even between PC platforms like Steam and Xbox for PC. As far as progression is concerned, a developer said that “the mysteries you find are kept with you.” In other words, if a player who is further along in the campaign jumps into your game, you should be able to avoid spoilers or new locations that they may have already found.

While 343 has already shot down the rumors that multiplayer will not launch with the game (it will, as they reiterated during our digital meeting), they still addressed the idea of Halo Infinite as a “platform.” The game itself will launch with a complete story “with a beginning, middle, and end,” 343 stated, but using Infinite as a platform means that they can build on that story and tell even more stories. They plan on using Halo Infinite as a way to “continue to grow the universe.”

As far as the game’s technical achievements are concerned, Halo Infinite will run at a “solid 60 fps at up to 4K resolution,” and the Series X gives the team 10 times the processing power per pixel. In light of the coronavirus pandemic and the cancelling of gaming conventions like E3 and Gamescom, 343 is continuing to develop a different “flight plan” that will hopefully let players go hands-on with the game before it launches, though those plans are still in the works.

Halo Infinite is “the most open, expansive [Halo campaign] 343 has ever created” that gives players “the ability to continue Master Chief’s story” but “deviate” from that path if you want to more fully explore the ring. Hey, if it worked for Gears 5 (at least in my opinion), then it can work for Halo, right?

We’ll find out when Halo Infinite launches for Xbox One, Xbox Series X, and PC this holiday season.