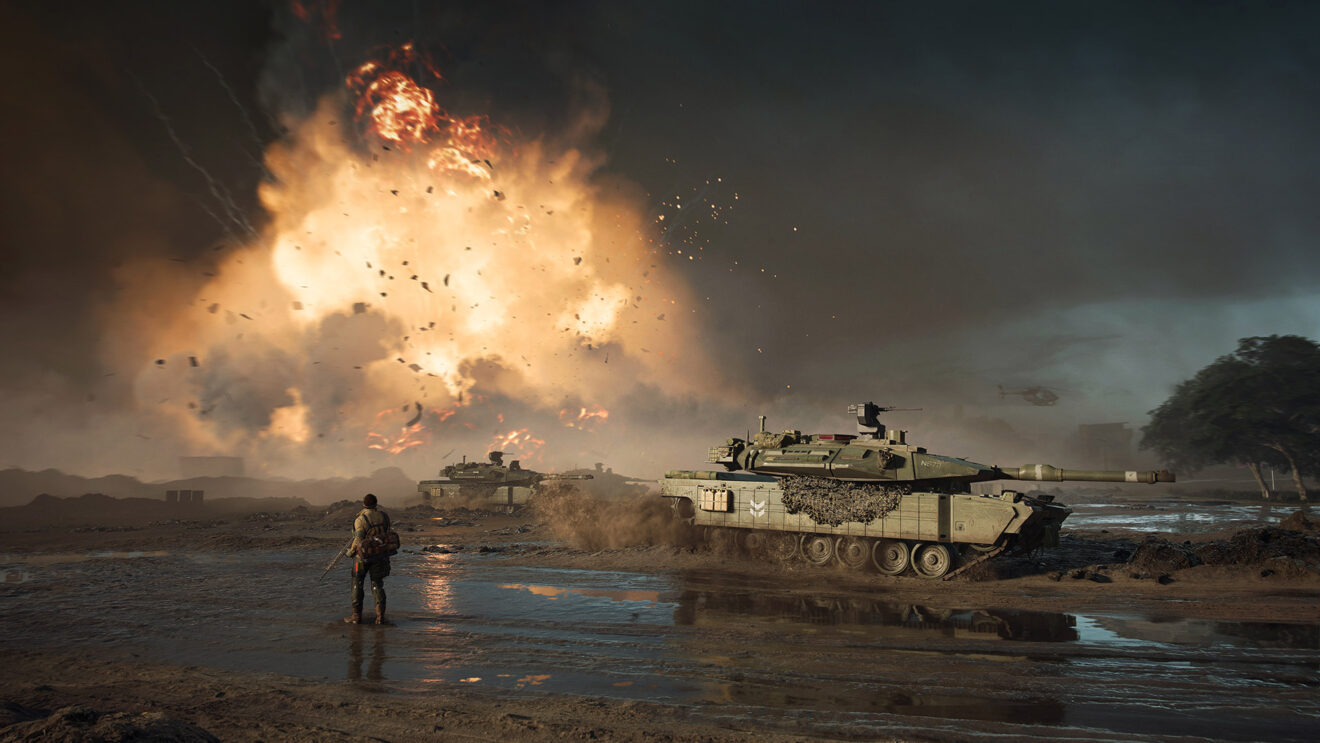 Battlefield 2042 will have cross-play, according to a recent blog post from developer DICE, although it’s unclear if it’s a feature that will be available at launch.

DICE confirmed that cross-play is “a function we’re looking to build and test for Battlefield 2042.” The studio delayed the closed technical playtest that was reportedly supposed to occur in early July to later this summer in order to test cross-play functionality, so it sounds like that feature is still in the works. Xbox Series X/S, PlayStation 5, and PC are the platforms that DICE will test cross-play on.

As for how it will work when it does come to the game, Xbox Series X/S, PS5, and PC players can play together. That being said, console players can opt out of playing with PC players. Xbox One and PlayStation 4 players will also play together, but they can’t play with the other platforms.

The blog post also stated that DICE is also building cross-progression and cross-commerce for Battlefield 2042. This means that all of your purchases and unlocks on one platform will be available to you if you switch platforms.

Other than cross-play, DICE answered some of the more popular questions that players had following the game’s reveal in June, including questions about its new Specialist class system and loadouts, AI soldiers, maps, and the robot dog.

As far as Specialists are concerned, DICE confirmed that each Specialist will have a Specialty (unique gadget) and Trait. For example, Mackay’s loadout will always have his grappling hook as his Specialty and “Nimble” (which lets him move faster while aiming down sights) as his Trait. However, players can pick whatever primary and secondary weapons, equipment (such as a supply crate or medical crate), and throwable (e.g. grenades) they want, no matter which Specialist they’ve chosen. This is exactly what we reported when we got to attend a pre-reveal preview, so we’re not sure why there was still confusion about it, but there you go.

DICE also addressed concerns from certain members of the Battlefield community that everyone will choose rocket launchers as their open equipment slot. Is it possible for all 64 players on a team to bring a rocket launcher with them? Sure, but DICE has reminded players that “choosing a more explosive approach for your Equipment slot would mean you won’t be able to carry a medical crate, or a supply crate, and thus leaves you without health or ammo replenishing options. So choose wisely.”

Likewise, DICE spoke to a common complaint that everyone playing as the same 10 Specialists will break the immersion, despite the fact that previous Battlefield games had the same exact character models for each of the four classes per team. DICE clarified that Specialists will be deeply customizable and that “two Specialists can look vastly different when wearing different skins.”

More importantly, the blog post confirmed that Battlefield 2042‘s squads will have a maximum for four players, and that in Conquest and Breakthrough, squads can contain more than one of each Specialist. In other words, there can be two Mackays in one squad, at least in the All-Out Warfare part of the game.

DICE also spoke to how AI soldiers will work in Battlefield 2042. There are three ways to play the game’s All-Out Warfare experience of Conquest and Breakthrough: solo with and against AI, co-op where your squad are all players but the rest of your team and the enemy team are AI, and multiplayer where AI will be used solely to fill in empty player slots. If a new player joins a server, it will replace an AI soldier. AI soldiers cannot be turned off in these modes, and all of these modes are online-only, so you can’t play offline solo against bots.

The most interesting aspect of AI soldiers is that they will not take on the roles of Specialists, but will instead be generic soldiers without Specialties or Traits. They will, however, be able to use the vehicle call-in system, engage with vehicles, capture objectives, and even revive a downed squad mate. In other words, they might actually be better teammates than the average human Battlefield player.

The blog post spent a few paragraphs talking about vehicles in the game, specifically the vehicle call-in system. First off, the robot dog that made a splash in the reveal trailer is not a Specialist gadget. It is, in fact, a vehicle call-in, and its name is Ranger. When called in, Ranger will “follow and protect you,” but you can also order it to scout a location. You can command Ranger to self-destruct (which will assumedly damage nearby enemies), and you can even place C4 on it and send barreling towards an enemy squad.

However, it seems that DICE has put in some stopgaps to make sure that there aren’t a hundred Rangers roaming the Battlefield. If you call in Ranger, that means you’re opting for the robot dog over other useful vehicles like a tank or transport truck. There is also a limit on how many of a specific vehicle can be called in at any given time, similar to Battlefield V‘s limits on vehicle call-ins like the Sturmtiger.

DICE also confirmed that both factions—the U.S. and Russia—will have their unique vehicles. Depending on which side you’re fighting for, you will either have access to a T28 tank or an M1A5. However, there are also “vehicles that anyone can play with, such as the MD540 Nightbird Helicopter, or the EBAA Wildcat Heavy Ground vehicle.” Unfortunately, there “isn’t a focus on naval specific warfare right now,” so it seems like attack boats are out of the question, at least for the game’s launch.

We’ve covered the most important points here, but you can still read the blog post if you want more information about the maps and how “clustering” will change the flow of Conquest matches, as well as a rundown on the penguins that were spotted in the reveal trailer. Unfortunately, there was no information on when we can expect to play the open beta, but hopefully we’ll learn more at EA Play Live on July 22nd when Ripple Effect Studios unveils its secretive mode.