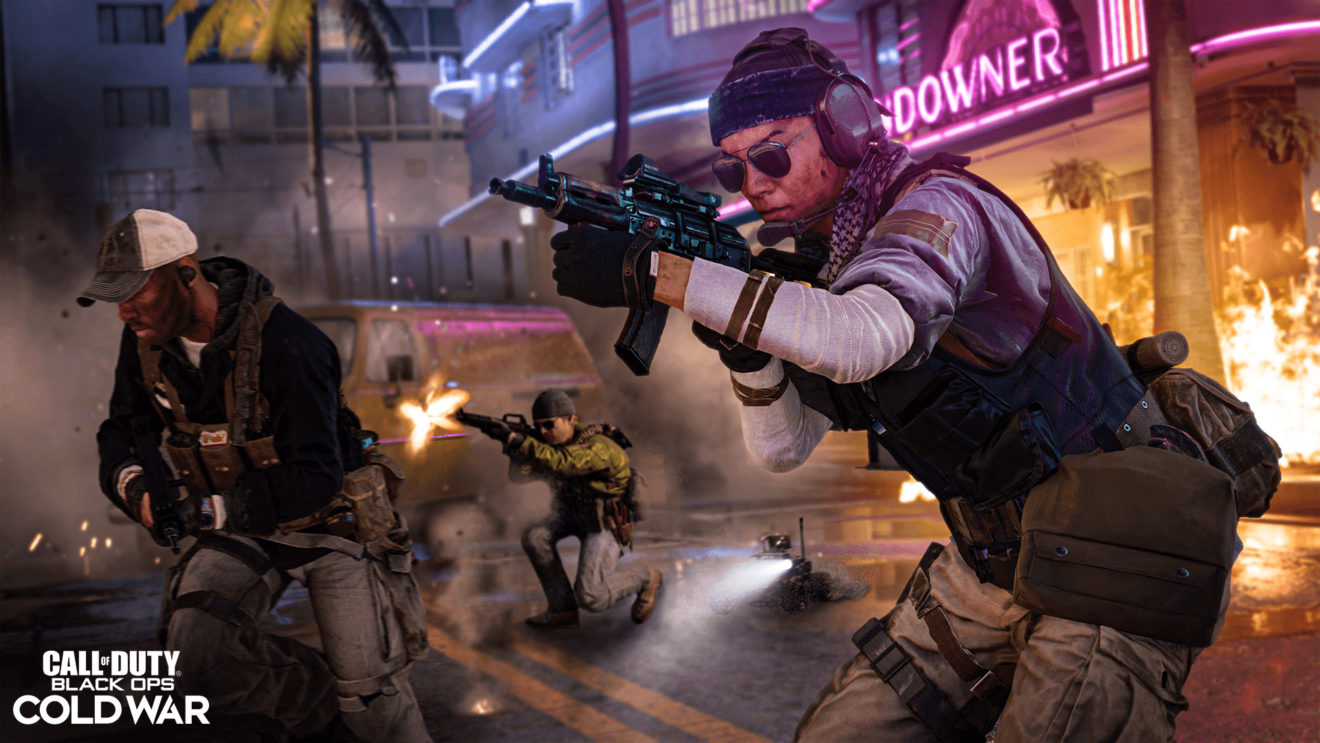 In a livestream event, Activision has revealed a slew of new details on the multiplayer modes and features in Call of Duty: Black Ops Cold War on today’s livestream. Here’s a rundown of all we learned.

First, we got an action-packed new trailer offering a look at the game in action.

As you might have noticed, that trailer also brought announcement of a multiplayer beta, which will offer early access to anyone who digitally preorders the game. The first beta period starts October 8th on PlayStation 4, presumably for digital pre-orders on that platform. Details on subsequent beta plans can be found in the official image from Activision below.

Next, Activision offered a detailed look at five of the game’s multiplayer maps. Satellite, set in the Angolan desert, is a larger map with natural spaces, focuses on a crashed satellite.

Armada, set in the North Atlantic Ocean, takes inspiration from the real-life Project Azorian. You’ll do battle between a number of larger and smaller ships, with player-controlled vehicles allowing you to travel between points of interest. (Interestingly, this map diverges from the classic “lane” philosophy of Call of Duty multiplayer design.)

Moscow, a three-lane map set in the heart of the city, features tall buildings on either side and a convergence point at the center of the map that looks to be a hub for big fights.

Miami is a night map that features the city’s infamous, neon-lined Ocean Drive. The combat space apparently offers a lot of openness and flanking opportunities via the beach and even the ocean, which can be traversed via watercraft. For those who prefer their action on terra firma, the main street offers long sight lines that benefit snipers.

Finally, Crossroads takes place on a frozen lake in Uzbekistan. This is a larger map that offers vehicles like snowmobiles and tanks to fight over.

Next, Activision showed off a number of new and returning game modes. The list of old favorites already confirmed includes Team Deathmatch, Domination, Search and Destroy, Hardpoint, and Control. But there have been some changes to the design philosophy of at least a few of these returning modes. Domination maps now feature larger capture zones to allow for more dynamic play, for instance. In Hardpoint, you can expect to see an updated spawn system. You’ll also be able to see where the next Hardpoint location will be in advance, allowing you to plan ahead.

In terms of new modes, Black Ops Cold War will get VIP Escort, a 6-on-6 mode with a novel objective. One player is selected as the VIP and has to survive for as long as possible as the rest of their team escorts them across the map. Rather than using a Create-A-Class loadout, you instead have a set arsenal: a pistol, smoke grenade, and spy plane. Your goal is to reach one of two possible exfil sites that rotate throughout the course of the match. While the VIP must survive to win, other players can be brought back to life with Last Stand and Revive.

Next, Activision teased a mode called Combined Arms Domination, which offers 12-on-12 action on bigger maps with lots of vehicles. There will be more Combined Arms variants of other game modes, too. (It’s a bit fuzzy whether the vehicles we saw during the map overviews will only be available during Combined Arms or if they’ll exist in traditional modes as well.)

For starters, Create-a-Class doesn’t use Pick 10 or any other points-based system. Instead, it uses traditional slots. No matter what choices you make, you’ll always have primary, secondary, lethal, tactical, field upgrade, and perks.

Field upgrades will always items placed in the world. The examples shown were a Field Mic that highlights enemy sounds, a SAM Turret that launches missiles at air-based Scorestreaks and player-piloted helicopters, and Proximity Mine that destroys any vehicle. Field Upgrades are earned solely based on time, not on score or performance in the match. The cooldown timer persists even through death.

While you’ll need something for every slot at all times, that doesn’t mean you won’t be able to break some rules. Wildcards are back with four options. Gunfighter unlocks 3 additional attachment slots for a primary, while. Perk Greed adds 3 extra perk slots. Danger Close doubles lethals and tacticals, as well as starts you with max ammo. Finally, Law Breaker lets you equip any weapon or perk in any slot.

The most radical overhaul of all might be to Scorestreaks, however. Now, the score you earn towards streaks won’t reset on death, so everyone will be able to work towards higher-powered streaks, not just the players who can get 10 to 15 kills in a single life. You’ll still earn streaks faster if you earn a ton of score in a single life thanks to bonuses, however. To keep players from spamming the more easily accessible scorestreaks, each one will go on a cooldown after its used.

Gunsmith is also back with a few upgrades, with the developers promising more optics and attachments than ever before. Every primary weapon has 54 attachments across 8 nodes, with at least 6 options for each node. By default, you can equip 5 attachments, though the previously mentioned Gunfighter Wildcard lets you use every single node. In Black Ops Cold War, Gunsmith will also show impact of each attachment as a positive or negative percentage, taking out the guesswork from your weapon builds.

Sprint now has a “running start” that means you start out with a burst of speed before slowing down to normal sprint speed. Slides also now start and end in a crouched position, and your movement speed will determine how much noise your footsteps make. (You can still use the Ninja perk if you want to be silent all the time, however.) Finally, jumping has been changed to use a more natural height, and you’ll slow down briefly after landing.

Like Modern Warfare before it, Call of Duty: Black Ops Cold War will be integrated closely with Warzone, the battle royale mode and standalone free-to-play game. Activision is calling it a “true evolution,” incorporating areas, weapons, and more from the Cold War campaign into Warzone. Cold War will also feature a unified progression, so anything you unlock in campaign or standard multiplayer will be usable in Warzone as well. Rest assured that you’ll still be able to use your old Modern Warfare unlocks in Warzone even with the influx of new content.

Even more exciting are Activision’s promises for Cold War‘s cross-platform support. Not only will the game allow you to play between Xbox One, PlayStation 4, and PC, but you’ll also be able to play in a single pool across generations, with PlayStation 5 and Xbox Series X/S versions of the game connected in. You’ll even be able to carry your progression over to all other platforms, regardless of where you started playing and where you end up.

And though it was widely expected, Activision also confirmed that Black Ops Cold War will get its own battle pass system.

In a brief segment mostly geared towards PC players, the Call of Duty: Black Ops Cold War devs touted some of the technical improvements. First, the Black Ops engine now runs on DirectX 12, leading to improvements in performance and latency reduction.

Additionally, Activision is partnering with Nvidia to bring ray-tracing, AI-based DLSS, and Nvidia Reflex Low Latency Technology to the game. Reflex support will also be coming to Warzone in the future.

Broadly, Fireteam will require you to team up in a group of four players and play on larger maps with a total of 10 teams, or 40 players, at once. You’ll work to accomplish multiplayer “objectives and modes, with the experience designed to “emphasize teamwork and reward creativity.”

The only specific example show was “Dirty Bomb,” in which the team must search for uranium, load it into a bomb, detonate that bomb, and then avoid the radioactive fallout to fight across the map.

Dirty Bomb is apparently just one of several Fireteam “modes and maps” we’ll learn more about in the run-up to launch.

Call of Duty: Black Ops Cold War launches November 13th on Xbox Series X/S, PlayStation 4, Xbox One, and Windows PC. A PlayStation 5 version is also planned, but given the lack of detail around the console’s launch, no release date has been announced.