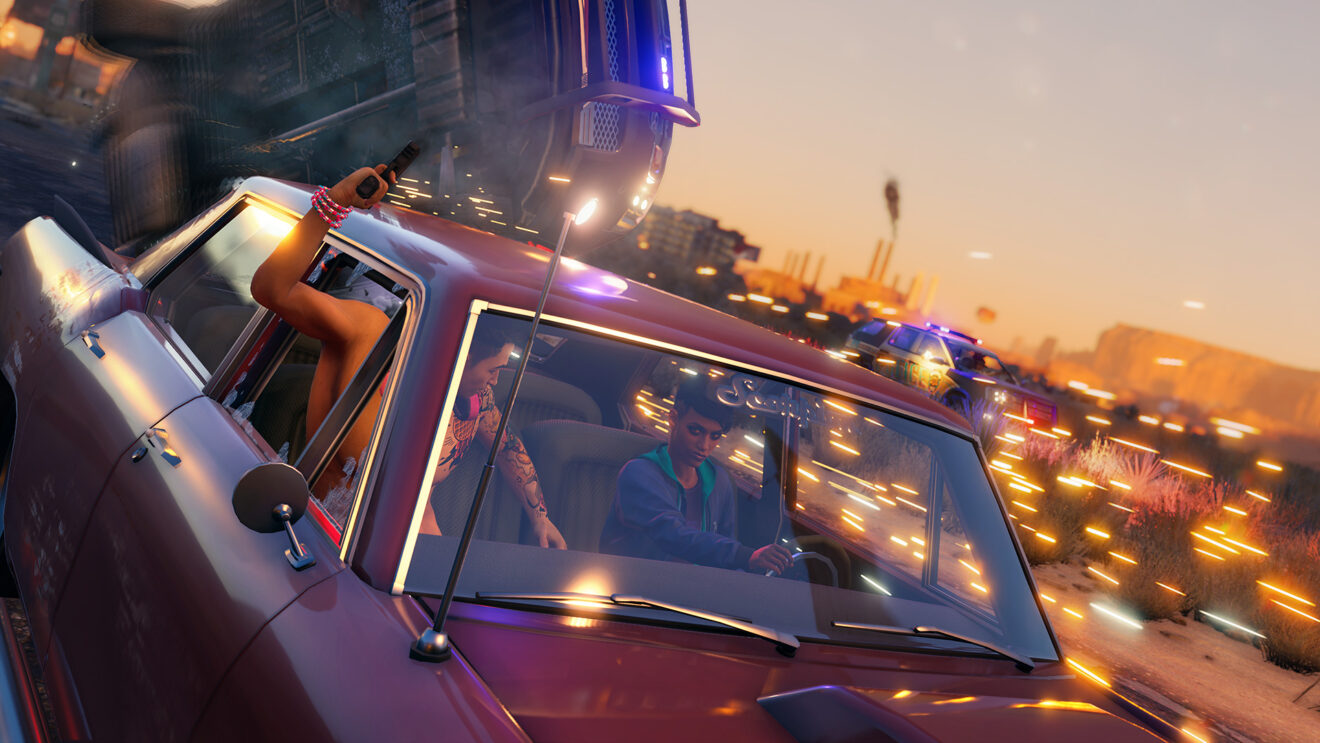 Taking the franchise back to its roots, players will once again take on the role of The Boss with the goal of building up the Saints into a criminal empire. Instead of continuing the intergalactic journey of Saints Row IV, Volition wanted to “go back to our origins and get back to that more contemporary crime angle,” chief creative officer Jim Boone said. But Volition has made a couple of key changes so that it’s not just a rehash of the first Saints Row.

The most obvious change is the setting. Santo Ileso is a massive sandbox based on the American southwest with nine distinct regions. These range from the glitzy and glamorous El Dorado district to the grime and grit of Rancho Providencia. Beyond more developed, urban settings, Santo Ileso also has a ton of open desert and natural landmarks to explore.

Santo Ileso is also home to the Saints three rivals in the new game: Los Panteros, Marshall Defense Industries, and The Idols. Each gang has its home turf regions and specific gameplay styles. Los Panteros are the “street-hard natives of Santo Ileso,” according to associate art director Stephen Quirk. They prefer to attack players full force with muscle and physical power. Marshall Defense Industries uses its high-tech weaponry to take on the Saints tactically. And The Idols are showy and brash anarchists who like to swarm the Saints with sheer numbers.

To help The Boss tackle these three rival gangs are three former members from each. Neenah is a getaway driver and master mechanic that used to tune Los Panteros’ vehicles. Kevin is a former Idol and DJ who seeks thrills wherever he can find them. Finally, there’s Eli, an MBA who came to Santa Ileso to build an empire—maybe not a criminal empire, but that’s fine with him.

These three characters will feature heavily in the story, but players will only control the fully customizable Boss, whether they’re playing solo or co-op with a friend. Saints Row features a lot of customization options that will “knock your socks off,” according to the devs, including eight distinct voices to choose from. The Boss’s main goal is to set up businesses that will act as fronts and grow the Saints into a criminal empire. Each new business you open will unlock new gameplay opportunities, including drug running and auto theft. And yes, insurance fraud is back.

Speaking of co-op, Saints Row will feature cross-generation co-op between the same family of consoles (e.g. PS5 players can team up with those on PS4), but there’s no word yet on true cross-platform play. The entire story is playable in co-op, but you can jump in and out of co-op games whenever you want.

One of the other big changes is with car combat. Volition stated that players will be able to use the car more as a weapon than they could in previous titles, though the developers didn’t go into too much detail about that. Volition said that the driving in the new Saints Row is “without a doubt the best driving in any Saints Row game” and that you can mod vehicles. Players will also have access to a wingsuit, but it’s unclear if we’ll see any other options for air travel.

Surprisingly enough, Saints Row already has a release date, and it’s not that far off. The game is scheduled to launch on February 25th, 2022, for Xbox Series X/S, PlayStation 5, Xbox One, PlayStation 4, and PC.