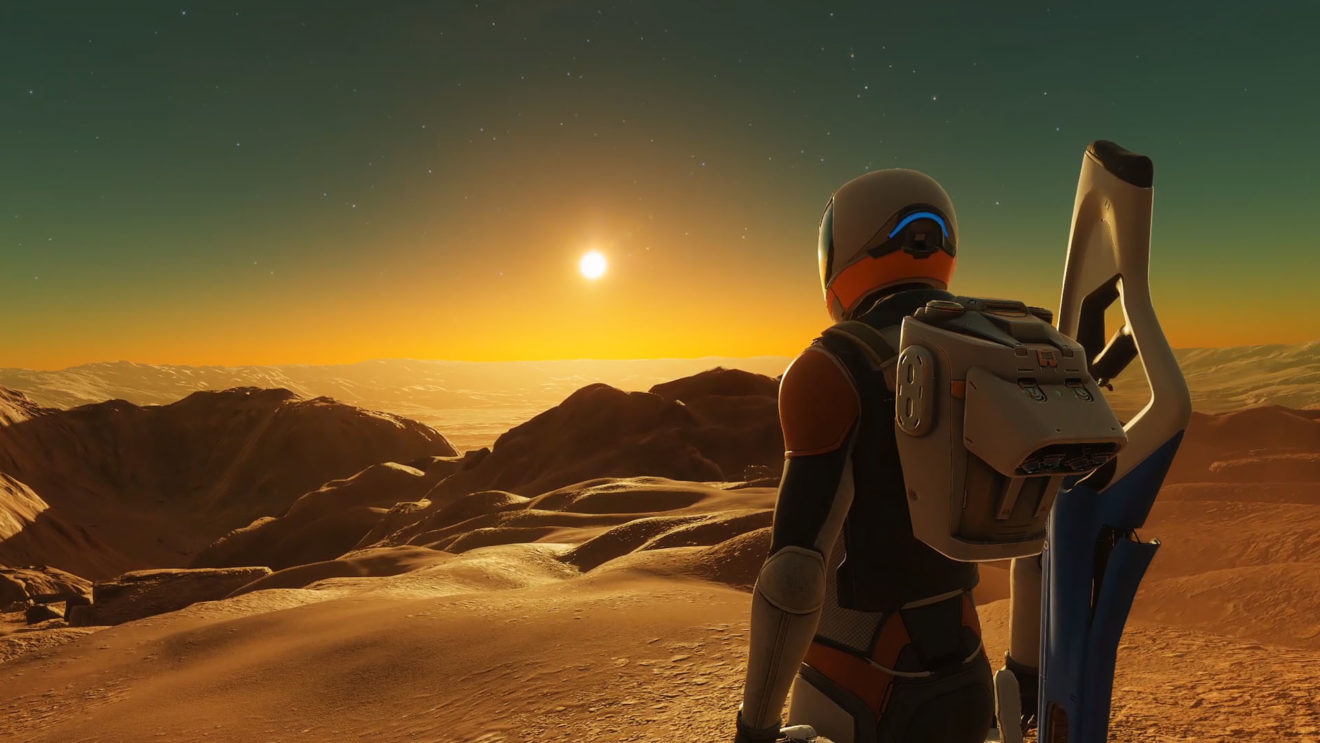 I recently had the chance to attend a special online event hosted by publisher Frontier Developments, and one of the upcoming releases I got to delve deeper into was Elite Dangerous: Odyssey.

Odyssey stands to be a major expansion for the world of Elite Dangerous. For the first time, players will be able to exit their crafts and actually set foot onto the worlds they’ve travelled to. There, on those alien planets, a whole new level of exploration awaits.

During the event, I got an early look at “One Giant Leap,” the first video in a new Road to Odyssey development diary series. In that video—which you can see above—game director Piers Jackson, lead designer Gareth Hughes, principal programmer Kay Ross, and art directors Chris Gregory and Jonathan Bottone help walk us through a sneak peek at what awaits.

One important first point to keep in mind is that Odyssey‘s on-foot exploration starts—but, in the future, won’t end—with light atmosphere planets. When you find and land one, the game will present you with addition data on the planet such as atmospheric conditions, pressure levels, and temperature.

Of course, letting players explore planets means you’ll need planets to explore, and the team is expanding the game’s selection to include new types of rocky and ice planets. As well, across all worlds, there will be additional kinds of flora to discover, which the teams promises will be recognizable, but still alien.

Once you’ve stepped out of your craft, you’ll have a host of new activities to partake in. Obviously, simply exploring the environment will be a huge part of the experience, as you discover what awaits outside of the confines of your craft. Using a new sampling tool, you can extract genetic data from the materials and life you come across, log those findings in a codex, and then take back some of that genetic info as data to trade at starports. In fact, Odyssey will even bring along a new rank based on the sampling of organics.

Watching the developer diary for Elite Dangerous: Odyssey, the timing felt a bit ironic, as I’d just spent the past two weeks playing for the first time—and becoming obsessed with—No Man’s Sky. Had I not been neck-deep in that, Odyssey might have felt like a random curiosity from a title I’d always been curious about, but never properly tried before. Instead, I instantly felt that connection to something I was actively, currently familiar with, so it was interesting to compare and contrasts the two games’ different takes on some of the same ideas.

One area where the pair seem to stand together is in that wonderful sense of discovery—and that’s something that very much resonated with me as I watched the presentation.

Earlier in the video, Jackson talked about how the team wanted to “Push the idea of getting that Neil Armstrong moment, where you step foot on a planet for the first time.” According to the team, Elite Dangerous has always been about exploration, but now that task can be done from having boots on the ground as well as your read parked in a pilot’s seat—which the team sees as the fulfillment of a promise made at the beginning of the game’s existence.

Elite Dangerous: Odyssey arrives for PlayStation 4, Xbox One, and PC sometime in 2021.