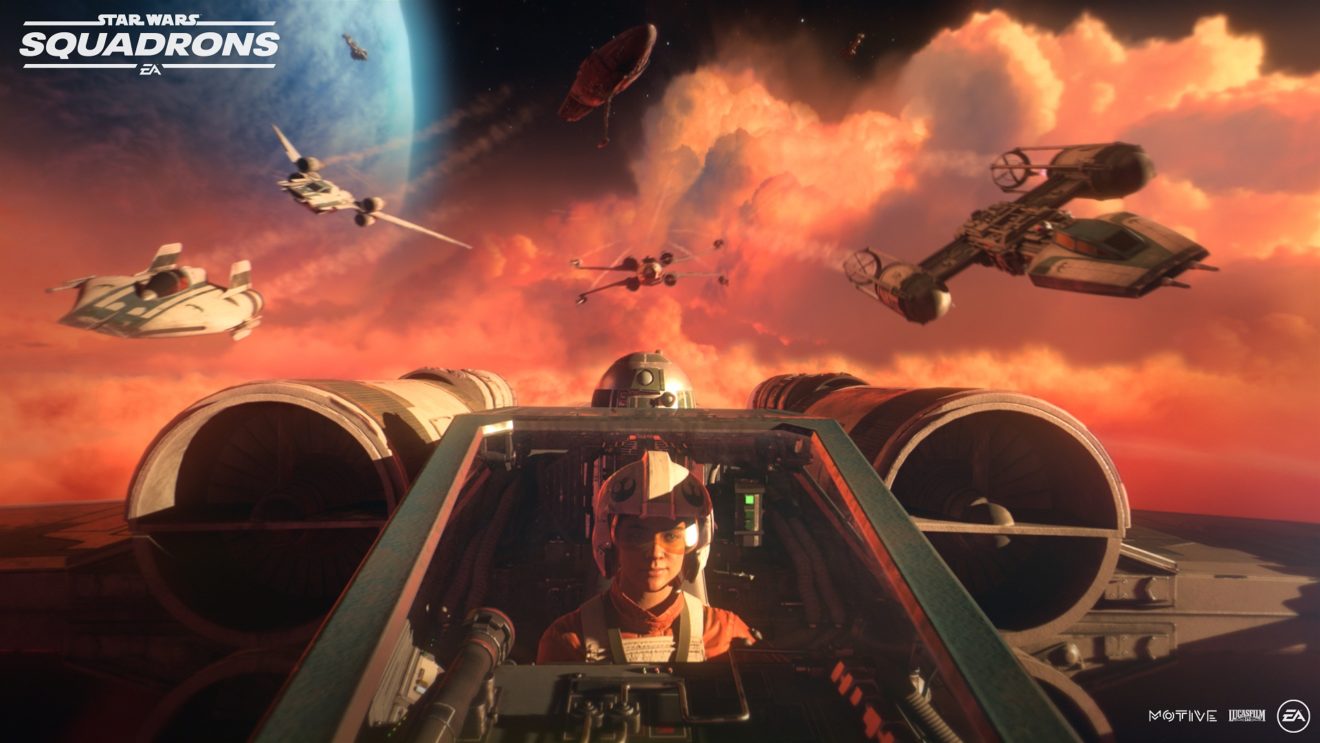 Gameplay from Star Wars: Squadrons debuted during EA Play Live, and it’s looking like developer EA Motive is shooting for the most in-depth starfighter experience possible.

First thing’s first: Squadrons will have a single-player campaign that basically serves as a tutorial for the multiplayer. Throughout the story mode, which jumps between New Republic and Imperial forces, players will have to go hands-on will all eight ships in the four ship classes: X-Wings and TIE Fighters in the Fighter class, A-Wings and TIE Interceptors in the Interceptor class, U-Wings and TIE Reapers in the Support class, and Y-Wings and TIE Bombers in the Bomber class. Each class has an interesting role to play in the five-on-five multiplayer battles. Support ships, for example, can keep Bombers alive as they make their way to the enemy flagships to deliver their payloads, while Fighters and Interceptors can clear the flanks and watch the Support class’s back.

Having a thoughtful approach to team composition seems like it will be key to victory, and Squadrons gives players a social hub where they can get together with their team, discuss strategies, and outfit their ships. To that last point, Squadrons‘ ships look to be deeply customizable, with both cosmetic items and over 50 components that alter how ships play. These components include engine upgrades, different kinds of bombs, and items like sensor jammers and chaff particles that can disrupt the enemy’s ability to get a bead on you. Players can also drop items like mines and turrets to slow down or kill enemy players.

As for the cosmetics, these seemed to range from obvious choices like new paint jobs for your ship and new uniforms for your pilots, as well as more fun stuff like an Ewok bobblehead for your instrument panel. The trailer specifically mentions that you can earn these items “simply by playing the game,” but there’s no way that EA won’t include microtransactions in Squadrons. Hopefully, EA has learned its lesson from Battlefront II and that won’t extend to the gameplay components for the ships.

The game will seemingly launch with two multiplayer modes: Dogfight and Fleet Battles. Dogfight seems like a standard team deathmatch, while Fleet Battles are multi-stage fights that’s playable against both human players and AI. The match starts with a dogfight in the middle of the map. Whoever wins that mode will then attack two of the enemy’s capital ships, while the loser of the dogfight will have to defend. The third stage, if the match makes it that far, is a fight over a massive flagship like a Star Destroyer by taking down its subsystems. It seems like a successful defense will push the attacking team back to the previous phase, though it’s unclear exactly how long a Fleet Battles match will last.

One of the more divisive elements of Squadrons will probably be its forced first-person perspective. Yes, that definitely makes the game look more immersive, and it’s probably due to the game having cross-play between consoles, PC, and VR players, but it might be a hard pill to swallow for Rogue Squadron fans who are used to third-person flying.