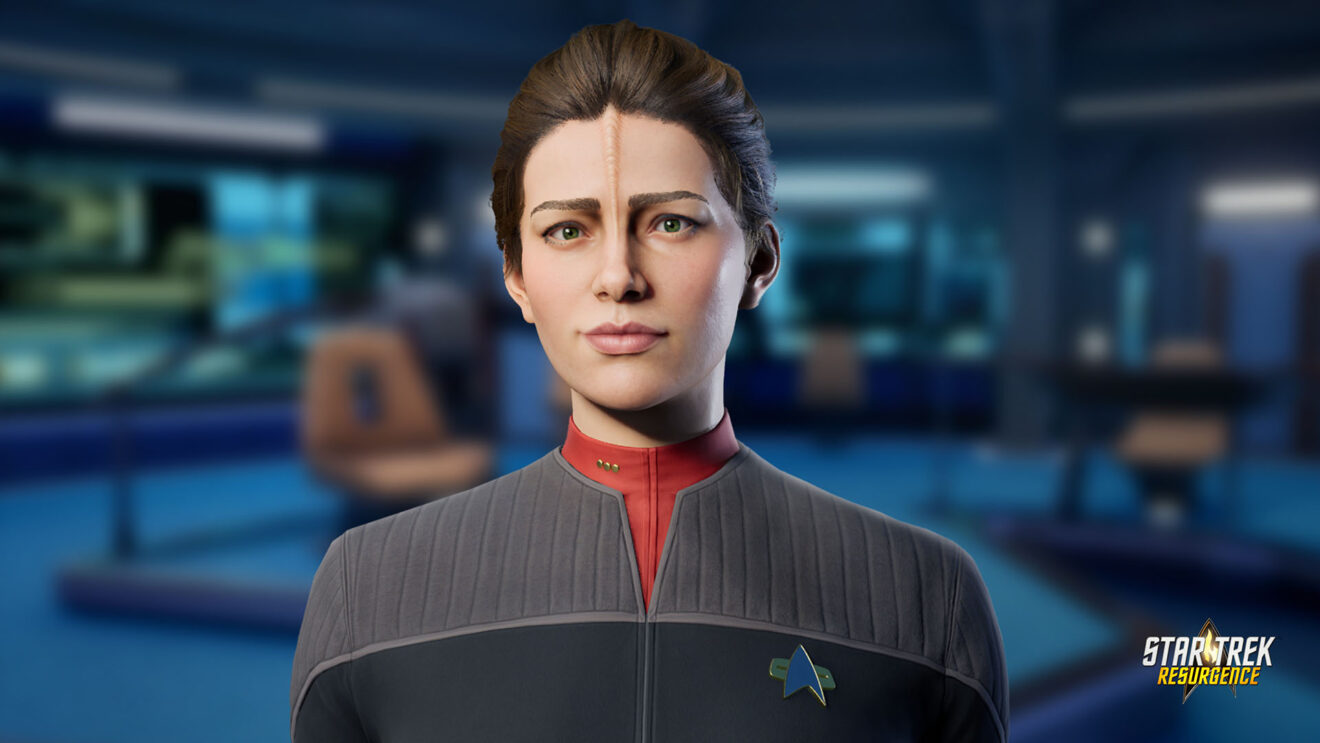 I’ve never played a good Star Trek game. I’m not saying they don’t exist; I’m just saying that I’ve never played one that captured what I love about Star Trek. While most games based on the franchise try to shoehorn expected versions of action and violence into a Star Trek narrative, that’s just not what I love about Star Trek. Obviously there is violent conflict in its universe, but what I appreciate about the franchise is how it thoughtfully explores complex ethical questions in a fun and digestible sci-fi setting.

It’s too early to tell if Star Trek Resurgence will be a good Star Trek game, but after observing a half-hour, hands-off demo of it, what I can say is that the people developing it understand what makes Star Trek special.

There’s a reason Star Trek Resurgence isn’t another run-of-the-mill space combat sim, and that’s because it’s being developed by Dramatic Labs. That name might not sound familiar, as this is the studio’s first game. But you probably recognize the name Telltale Games, which is where many of Dramatic Labs’ creative team hails from, including lead writer Dan Martin and cinematic director Kent Mudle, who walked me through the demo.

Set in 2380 (a year after the events of Star Trek: Nemesis), Star Trek Resurgence tells the story of two crew members on the USS Resolute—first officer Jara Rydek and rookie engineer Carter Diaz—as they set out on a diplomatic mission to prevent an all-out war between two alien races. It’s in the specifics of this conflict where Resurgence begins to feel like a real Star Trek story. For decades, the “salt of the earth” Hotari have served as the labor force for the more “military-oriented” Alydians, mining their own moon for dilithium.

As the game begins, the Hotari have finally taken back what they feel is rightfully theirs, capturing their mines from the Alydians, whose technology made it possible to extract the dilithium in the first place, and the Alydians are moving in a military fleet to take the mines back. To make matters more complicated, neither group belongs to the Federation, but the Federation had at one point traded dilithium with the Alydians, a fact that could make the diplomats on the USS Resolute—including Ambassador Spock—less trustworthy to the Hotari.

Watching the demo felt like watching a lost Star Trek episode from the Next Generation and Deep Space Nine era. When I asked them what were some of the phrases on their “vision board” for Resurgence, Martin mentioned “authenticity,” “relationships and camaraderie,” and “moral and ethical choices.” At least in the opening scenes, Dramatic Labs has seemingly managed to tap into that secret sauce that makes a good Star Trek narrative. Seeing Spock, Rydek, and the Resolute’s Captain Solano—who is trying to make up for his own recent mistakes that resulted in loss of life and nearly the destruction of his ship—discuss the complex and intricate politics involved in navigating their diplomatic mission was infinitely more engaging to me than if they’d just been shooting at aliens with their phasers.

One of the things that makes Resurgence feel like a new way to explore the Star Trek universe is the choice to let players take on the role of two different characters. Rydek represents the “upper decks” as a first officer and member of the bridge crew. Diaz, on the other hand, is an engineering crewperson—not even a Geordi La Forge, but more like a Reggie Barclay (without the creep factor)—representing the lower decks. While classic Star Trek media always brought in characters from the lower decks, the focus has generally been on the officers on the ship. Resurgence gives us an opportunity to meet two different casts of characters: the bridge crew through Rydek and the engineering crew through Diaz.

What’s really interesting about the dual protagonist setup is how that will play into Resurgence’s choice-based gameplay. Given Dramatic Labs’ Telltale pedigree, it’s no surprise that, while there will be some action events, the bulk of Resurgence’s gameplay comes in the form of making choices in dialogue and in more action-oriented moments.

But since you’re experiencing the story from two different characters’ perspectives, choices you make as one can now affect the other. Mudle explained that “as Jara, you will often be giving orders and making big command decisions. And then you will often have to execute those orders or experience the consequences of them as Carter.”

Given that Resurgence’s story is determined by player choices, I was somewhat concerned by how Dramatic Labs would handle the characters. You want to give players options and let them craft their own narrative, but there are expectations with how Starfleet officers and crew members conduct themselves. The sense of camaraderie and always trying to do the right thing, especially when it’s also the hard thing to do, is what makes Star Trek characters so memorable. Letting players choose the “bad” option would kind of go against the spirit of the franchise.

Dramatic Labs seems to have struck that middle ground, or at least are attempting to. According to Mudle, there’s a “spectrum of Jaras and a spectrum of Caters at which point they could still be that character, and that can get pretty broad, depending on the scenario, but both of them are loyal Starfleet officers who want to complete the mission.”

How you complete the mission is where the real choices come in. “Should you do it based on protocol, or should you do something more drastic, based on the suggestions of your staff or what your friends are saying? There are choices between duty and friendship, but you’re still going to be a Starfleet officer at the end of the day.”

Immersing players in the journey that the characters take—and seeing how they might have to make decisions that they didn’t think they’d have to make at the beginning of the game—promises to provide for some really interesting storytelling moments.

“We put a lot of work into crafting [the story] so that there will be times where you might think that the person you were at the beginning of the game, the way that you were playing Jara, wouldn’t have done X or Y,” Martin said. “But you’ve kind of been taken on this journey, that character pulling Jara in one direction is the character that you like and you trust, so you’re going to do something that feels like you’re stepping outside of yourself as Jara or Carter. Do you favor security or justice? Mercy or realpolitik pragmatism? That can have a pretty interesting range and there are some big consequences that your choices can deliver.”

Resurgence will feature both big and small narrative branches, though “the core situations are pretty similar for most players,” Mudle said. The consequences for a player’s choices have a major impact on “the relationships they build and who makes it to the end of a thing alive.” As to what version of the story actually exists within Star Trek canon, Martin just said that “the real ending is your ending. I think that’s the best way to put it.”

As positive as my impressions were of Resurgence so far, it’s important to keep in mind that I only saw less than a half-hour of the game and still have a few reservations, mostly with the game’s presentation. The actual direction and voice acting really fit the spirit of Star Trek, but some of the animations looked stiff and the lighting seemed a bit flat. It could just be because I was watching a remote demo over Zoom, but these visual issues were a little distracting. Still, that’s not make-or-break for me.

My biggest reservation comes from the choices themselves. When presented with a dialogue choice, there always seemed to be three separate options. However, it wasn’t always clear what option would result in you making your intended choice. One option that seemed to give Jara a more mean-spirited response actually ended up as jokingly sarcastic. Likewise, while the dialogue choices were assigned to the X, Y, and A buttons on an Xbox controller, it didn’t seem like those choices always fit the same sort of intended tone.

One thing that can really derail my immersion in these kinds of choice-based games is picking an option and not getting the intended result. The disconnect between what I expect the character to say and how they actually say it can put a damper on games where dialogue options aren’t even the main point. To have that happen in a game where dialogue choices are the central gameplay focus could get old really fast.

However, like I said, I only saw a small portion of what promises to be an expansive Star Trek adventure. Once I get to go hands-on with Star Trek Resurgence myself, I might find making those kinds of choices—or at least understanding how the game is framing them—more intuitive.  Everything else about the game screamed authenticity, not just in the technical details, but in capturing the spirit of the franchise. While the end product still remains a mystery, what’s clear to me after the demo is that the people making this game care about Star Trek.