Ever since its first game launched on the original PlayStation way back in 1996, I’ve been a fan of Resident Evil. Now, it isn’t one of my all-time favorite franchises or anything, but it’s a series that’s consistently been there for me when I’ve needed a little survival horror to shake up my life. It’s given me characters that I adore to this day like Jill, Claire, and Leon, it’s provided me way more quality constancy than my beloved Silent Hill, and I’ve even enjoyed releases like Code: Veronica or Resident Evil 6 that others found lacking.

It was the sequel to that last game, however, where something in our relationship changed. With the launch of Resident Evil 7, it felt like Capcom was pushing me out the door for a younger and more modern fan.

Now, I want to be clear: I hold no hatred in my heart for Resident Evil 7. It came at a time when the franchise desperately needed some shaking up, and boy did it do some shaking. It was a bold, brave new Resident Evil that brought fire back to the franchise (and to Capcom), and it rejuvenated the fanbase in a way that was incredibly positive. And, it’s not like we haven’t been through this before. When Resident Evil 4 originally launched, it was something of a drastic shift for the series, as it tossed out trademark aspects such as fixed camera angles and tank controls—changes that some fans saw as heresy. Yet, all these years later, that game was one of the best things that could have happened to Resident Evil in terms of charting a path toward a better future for the franchise.

None of that, however, changes the fact that I felt alienated by what I played of RE7. My campy B-movie tales of zombie survival got swapped for psychological terror and body horror, offering up a grisly story that was more The Texas Chain Saw Massacre than Dawn of the Dead. Much more than that, though, it made the switch to being first person—and lord do I hate first-person horror games. It wasn’t necessarily that Capcom’s attempt at the subgenre was bad per se, it was more that I’d suffered too much previous trauma from titles like Outlast and Daylight. Fumbling awkwardly around dark, unfamiliar locations in first person, where my only option is to run instead of fight, is like the video game equivalent of a vampire that feeds on joy instead of blood. The more I’m exposed to such games, the more joy gets sucked out of my life.

Thus, I cannot underscore just how shocked and excited I was when Capcom announced that the eighth major chapter of the series, Resident Evil Village, would be getting a third-person mode in the Winters’ Expansion DLC. Sure, a whole new campaign scenario featuring Ethan’s daughter Rose and the addition of a new flavor of Mercenaries are nice and all, but a third-person mode? Really truly?

I had attempted to play Resident Evil Village last year, as I really wanted to give Capcom’s latest original efforts in the franchise a proper chance. It wasn’t that I needed the game, as I’d come to be completely content with scratching my survival horror itch with the company’s RE-makes (which may have swapped fixed camera angles and tank controls for more modern gameplay, but did so while still being in third person). Still, Village looked kinda neat, it seemed to harken back to more traditional Resident Evil storylines and characters, and it featured… I mean, you know.

Unfortunately, a few hours in, I just wasn’t enjoying myself as much as I had hoped. First person and horror simply don’t work as a pairing to me, and playing Village was reenforcing that. There were a few aspects to the game itself that I wasn’t liking, but I kept feeling like I wasn’t able to appreciate everything that did work for me because of the way I was experiencing it.

And now, that’s all changed. Thanks to the new third-person camera option it brings with it, the Winters’ Expansion DLC is a game-changer for me—both literally and figuratively. From the opening moments when Ethan is carrying baby Rose upstairs, everything was different. It’s shocking how much a simple switch in camera placement can mean for a game, not just in terms of the gameplay itself, but also in the atmosphere and how we understand our place in its world. I’ve known plenty of people who swear up and down that the most immersive method for playing horror games is in first person, but that will never be the case for me. I don’t want none of that “it makes you feel like you’re there, man” hippie bullcrap. I want iconic Resident Evil characters, and I want to see them living out these crazy adventures for themselves, damnit.

Which, really, is another thing the new third-person camera option does for me: It makes Resident Evil Village feel like Resident Evil now. Unlike the Silent Hill series, which is chock-full of entries that could easily have been some other game with a “Silent Hill” label slapped on them, there had never been a mainline Resident Evil title that felt like it didn’t completely belong to me until RE7. Now again, for all of you out there who loved it, I’m not saying that Capcom made a mistake with the direction they took the game in—I’m just saying that it strayed too far from what I personally wanted. Now, Village can both be what it is to those who enjoy the new direction of the series, while also feeling more traditional for players like me. With this DLC, Capcom has bridged the gap between both sides of the argument.

Well—mostly. When playing Resident Evil Village using the added camera option, you’re still playing a first-person video game, just from a different angle. I’m assuming that there were various tweaks to the game that Capcom had to make as a part of the camera choice, but it’s very clear that the environments are meant to be seen through the eyes of Ethan, not from behind him. Things get a little awkward from time to time, especially when interacting with objects or searching for items. And, whenever a cutscene kicks in and the view switches back to first person, it’s especially obvious that you were intended to have seamlessly transitioned into that event without the drastic shift in perspective.

Still, the Winters’ Expansion provides me the chance to enjoy Resident Evil Village when I was struggling to before, and that alone makes the DLC worth it for me. I never expected Capcom would bring something like this to the game, but they have, and now even more players will get to tag along with a faceless white guy as he gets continually (and brutally) abused by another group of weirdos off in some random Eastern European village.

(Oh, and on the “faceless” front, Ethan specifically looks away from you in third-person mode when you try to catch a proper glimpse of his face. I appreciate Capcom’s commitment to the gag.)

However, as interesting as the whole idea of a Resident Evil with a selectable camera sounds for giving everyone what they want in the next major chapter of the franchise, I can’t see this becoming a trend. Trying to balance these types of games for two totally different play styles seems like a headache that Capcom would be crazy to take on, and that doesn’t take into account all of the other differences between old-school Resident Evil and this newer era of games. It’d be very easy for the developer to get into another position of “trying to be different things for different people” that it found itself in when making Resident Evil 6. And boy, does nobody—except for maybe me—want that.

Review code for the Winters’ Expansion DLC was provided by Capcom. 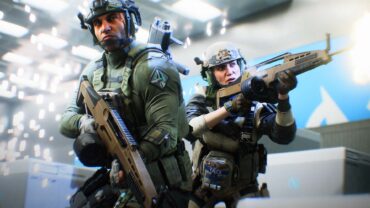