The right game, at the right time, in the hands of the right people.

Kevin “Keev” Akre made his run through Evo Japan’s Soulcalibur VI tournament look easy. At times it seemed like little more than a perfunctory ceremony before he could pose with his trophy for a marauding band of photographers.

Only Shen Chan, the man who challenged him in grand finals, made him sweat. Each game in their set came down to the wire. All the record books will remember is that it was a 3-0 sweep, though. It was also the only time throughout the end stages of the tournament that he faced any meaningful opposition.

His win was just another notch in France’s history of excellence in Soulcalibur. France is to Soulcalibur as Japan is to Guilty Gear or Street Fighter, or what Korea is to Tekken. These aren’t places where individual champions simply emerge from, but locales where their respective scenes flourish. Soulcalibur is a tributary of the larger lake that is fighting games, and yet France has grown to inhabit the top of the food chain.

Hayate, a veteran of France’s competitive fighting game scene, attributed some of the series’ popularity to its grand sweeping story set in medieval Europe, which was fairly unique for a Japanese fighting game at the time. That doesn’t get to the heart of why France fell in love with Soulcalibur, though. How that happened comes down to a confluence of factors both coincidental and cultural.

Hayate began competing in the first Soulcalibur in 2001 at the age of 18, which makes him one of the oldest and most storied players in all of French Soulcalibur. He now produces videos to help others improve at the game.

“Initially, the tournaments were held mainly in Paris, but groups of passionate players emerged from different regions of France, such as Lyon, Tours, Bordeaux, [and] Rennes. The community was small, but grew up very quickly. Unlike the current era, players could not train online, so they have to meet each other every week in friendly gatherings,” he said.

Hayate credits a tournament organizer who goes by the handle “Asenka” for the growth of that scene.

Back then, the arcade version of Soulcalibur was not considered much of a looker—at least not to Asenka. Initially, he wasn’t sold on the game and was more interested in playing Street Fighter III on the Dreamcast. But his opinion of the game changed dramatically when Soulcalibur was later ported to the machine that marked Sega’s final expedition into the console jungle.

“I think it was the first time you can say a home version was far better than the arcade version,” Asenka told me. “It was not arcade-perfect. It was superior.”

Not only did the home version of the game stand out for its beauty, it also counted a team battle mode among its unique features, as well as the inclusion of “The Dread Pirate” Cervantes. According to Asenka, France had a special affinity for the Dreamcast, and Soulcalibur had become a game best played on that machine.

When Soulcalibur came out, Asenka was just starting business school. He, along with a few friends, organized a festival dedicated to manga, anime, and retro gaming. He also felt so passionately about Soulcalibur that he was confident others would see the game and fall in love just as he did, so he organized one of France’s first major Soulcalibur tournaments. According to Asenka, it was there that the game became one of the most popular tournament games in France.

For the first time in fighting game history, the best way to play one particular fighting game was on a home console, and that console just happened to be relatively beloved in France. But why exactly was the Dreamcast so popular there? Well, Asenka (as well as several other players I spoke with) credits that to the influence of Japanese pop culture on France.“In Europe, manga is most popular in France, then Italy and Spain,” VIZ Media Europe president Hyoe Narita told CNN’s Geekout in 2012. According to that report, France makes up half of Europe’s manga sales, putting on similar ground to that of the United States’ manga market. On top of that,  anime convention Japan Expo Paris attracts more than 200,000 visitors. Due to this built-in love for Japanese pop culture, it’s likely that that the Dreamcast was set up for success in France from the get-go. In fact, the first Dreamcasts used to run Soulcalibur tournaments in France were imported from Japan.

With Soulcalibur picking up steam at home and regional rivalries within the country burgeoning, they began to travel outside of their borders. Their first international rivalry was with the U.K. Hayate, Asenka, and a select few others went to London and, according to Asenka, devastated the British players using the character not in the arcade version of the game: Cervantes.

Asenka mentioned that every French player loved The Dread Pirate because they discovered bugs, infinite combos, and all sorts of off-the-wall tactics with him. “If you arrived at a tournament and you discovered a new bug, that’s okay. You can use it in the tournament. I would even say you have to use it because it’s so funny,” he said with a laugh.

He reminisced about bewildering people in London when he found out that he could get the first hit as Voldo and then literally run circles around the stage and run the timer out to win. They loved the games, warts and all.

When the French contingent of players returned to London down the road, they discovered that their rivals had evolved. Iron had sharpened iron, and this time the French players did not fair so strongly. “So I told them, ‘Okay. this time you beat us. I have a deal for you. You come to France and you play our champ. She’s 9,’” Asenka said.

The best player in the U.K., who played under the simple moniker of “John,” was as incredulous about this mysterious prodigy as everyone else at the meetup. He vowed that he would never lose to a little girl, and if he did he would stop playing forever.

One month later their rivals from the U.K. came for a tournament that Asenka ran out of his own home. The night before the tournament they held informal first-to-10 exhibition matches. Marie-Laure “Kayane” Norindr—the preteen girl—trounced John 10 to 1.

Kayane beating John became a larger-than-life story for the French Soulcalibur community, according to Asenka, and the running gag was that players never saw John compete in France after that. “I have never heard about him again, so maybe he actually did stop playing,” Asenka said. “Nobody believed us around the world when we told them there’s this little girl, and she can beat almost everyone.”

Norindr told me she she had first been drawn to Soulcalibur at an even younger age, before she started to compete. “I was a child of 7 years old, and I was seeing a new world opening to me, and I was very excited. I played Xianghua. She’s my main. And she was 16 years old back then, so when I was a little girl, I really wanted to look like her when I was 16. So that’s why I played her, because she’s a cute Asian girl.”

Like others, Norindr credits the beauty and superiority of the Dreamcast version of Soulcalibur, Japan’s pop-culture exports and how readily they were received in France, and Asenka’s hard work as an organizer for the game’s success in her home country.

Rivalries developed not only between France and the U.K., but eventually with Japanese and U.S. players as well. They would visit France, lose, and return home to spread the word about the strength of the French scene.

In 2003 France sent its best player, Dan “The Nightmare” Vu, to the U.S. to compete in the most prestigious fighting game tournament in the world: Evolution.

Vu carved his way through the bracket, and then through top 8 to make it all the way to the grand finals. Back at home, before Twitch.tv, before Justin.tv, before livestreams became a ubiquitous commodity, his countrymen gathered in an IRC chat room. The same way that baseball fans may have huddled around a radio long before the advent of televised broadcasts to hear Brian McNamee call game three of the 1923 World Series, French Soulcalibur fans were watching the drama unfold via commentated text updates.

Every hit, every KO, every ring out, and every perfect in the set between Vu and Will “Semi” Johnson, an American Astaroth player, was feverishly described in the chat until, finally, the call came in.

Vu’s victory in the tournament remains his favorite memory. “The fact that I was alone against a whole country, succeeding in winning this world championship in U.S. territory, it was unique,” he said. “I was like the hope of a whole country. This, for sure, was my greatest achievement.”

That year’s Evo was the first time that a Soulcalibur game had been featured. Since then, it’s been featured on the big stage five more times. Soulcalibur II was run again in 2004, boasting an American victor. Soulcalibur IV was run by the tournament organizers in 2009 where Jonathen “Malek” Ledy of France won. Naoaki “Shining Decopon” Yanagihara of Japan claimed the Soulcalibur V title at Evo in 2012. This year, the game was featured twice: “Keev,” won Evo Japan 2019 for France in the franchise’s most recent installment, while Japan’s Yuta “Yottoto” Sudo took the top prize at this summer’s Evo 2019.

After Vu’s historic win in 2003, Asenka decided to create the World Game Cup, which he ran out of the Palais des Festivals de Cannes, home of the Cannes Film Festival. His mindset was that a world cup would be important to foster international rivalries, something he believed to be necessary for the continued growth of the scene.

Asenka told me that he loves the American players, “And because I love them, I love to see them lose against my French teammates. It’s rivalry. When you like your opponent, you want to beat them because you know they’re very strong.”

He doesn’t just root for his countrymen out of nationalistic pride, but also because he wants to see the American rivals want to go home, become stronger, and return for revenge. He roots for that revenge, too, so that it will, in turn, inspire French players to continue working together to improve.

The hope of Asenka, and numerous other players, is that Bandai Namco will eventually support the game with an officially sanctioned World Tour, much like it does with Tekken and Dragon Ball FighterZ. This, they hope, would lead to a tide of new international rivalries, and a rising tide lifts all boats.

In the end, Asenka said, he’s more interested in the stories and drama of close rivalries than merely seeing his country strangle the competition with a vice grip.

“As long as you have rivalry, you have a story to tell.”

Some quotes have been lightly edited for clarity. An earlier version of this story incorrectly referred to Kevin Akre’s opponent in the Evo Japan grand finals as “Shen Yuan.”

David O’Keefe is a freelance journalist and photographer who smiles at the very mention of leopard geckos or Warcraft 3. He studied journalism at The College of New Jersey in his home city of Trenton and was taught photography by the Pulitzer-winning John Filo. As a result of his struggles with depression and social anxiety disorder, David has also become a vocal mental health advocate. He covers games, esports, tech, and entertainment. Follow him on Twitter @DaveScribbles and peruse his portfolio on Muck Rack. 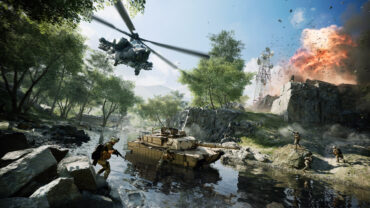