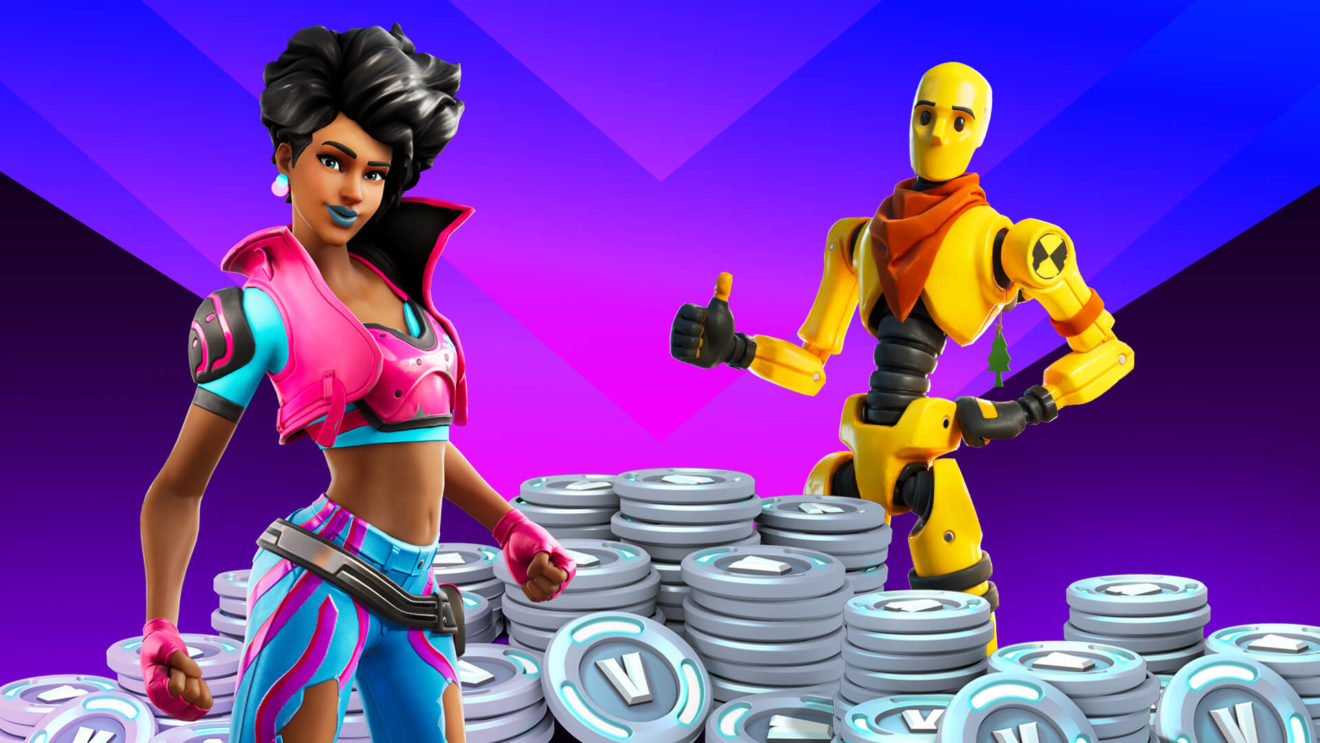 Strap in folks, because we’re about to head off on a crazy ride.

Earlier today, Epic Games announced the Fortnite Mega Drop, a new way to save up to 20-percent on “V-Bucks and real-money offers” when purchasing them directly from Epic using select payment methods. For example, where as you’d normally pay $9.99 for 1,000 V-Bucks in Fortnite, using this new method would get you the same amount for the discounted price of $7.99.

In addition, Epic announced that anyone who had purchased V-Bucks recently—specifically from July 14th through today—would be granted a bonus pool of V-Bucks amounting to 20-percent of the value of what had been purchased. Some players have already received that bonus, while everyone else should be getting theirs by August 17th (if they’re eligible).

On PlayStation 4, Xbox One, Nintendo Switch, PC, or Mac, there’s no catch to all of this—you just buy whatever you want through the game, and you’ll get the discount. On mobile, however, is where things take a bit of a twist.

In order to receive the discount on iOS or Android, you’ll need to set up Epic direct payments. Basically, instead of giving the money first to Apple or Google—as is the norm for smartphone and tablet apps—you set up your account to pay the money directly to Epic.

“Currently, when using Apple and Google payment options, Apple and Google collect a 30-percent fee, and the up to 20-percent price drop does not apply,” reads the announcement. “If Apple or Google lower their fees on payments in the future, Epic will pass along the savings to you.”

That statement refers to one of the arguments that has been levied against not only the App Store, but other digital storefronts like those on Steam and Xbox One, in recent years: that the companies running those stores are keeping too big a piece of the pie. The industry standard is 30-percent, meaning that if you purchase a digital PS4 game for example, Sony gets a 30-percent cut of that sale.

Epic, meanwhile, has been pushing for lower revenue sharing percentages ever since launching its own digital store. On the Epic Games Store, the company keeps only 12-percent of every sale, meaning 88-percent of the revenue goes to the game’s creators.

In terms of general game sales, that wouldn’t be a big deal for Epic, as its biggest release—Fortnite—if free to play. However, those revenue splits also come into play for any additional digital purchases made via those games, and when considering all of the microtransactions Fortnite players are making, you can see why Epic might want the industry moving to lower rates.

(On the other side of that argument, the companies charging those rates would no doubt argue that they’ve sunk a lot of cost into research & development, game hardware production, the running of servers and customer support, and so on.)

Merely a few hours after the reveal of the Fortnite Mega Drop, Apple announced that it was pulling Fortnite from the iOS store. The reason? A violation of Apple’s App Store guidelines.

Today, Epic Games took the unfortunate step of violating the App Store guidelines that are applied equally to every developer and designed to keep the store safe for our users. As a result their Fortnite app has been removed from the store. Epic enabled a feature in its app which was not reviewed or approved by Apple, and they did so with the express intent of violating the App Store guidelines regarding in-app payments that apply to every developer who sells digital goods or services.

Epic has had apps on the App Store for a decade, and have benefited from the App Store ecosystem – including it’s tools, testing, and distribution that Apple provides to all developers. Epic agreed to the App Store terms and guidelines freely and we’re glad they’ve built such a successful business on the App Store. The fact that their business interests now lead them to push for a special arrangement does not change the fact that these guidelines create a level playing field for all developers and make the store safe for all users. We will make every effort to work with Epic to resolve these violations so they can return Fortnite to the App Store.

Apple has been no stranger to conflicts with game companies as of late. Both Microsoft’s xCloud and Google’s Stadia game streaming services are nowhere to be found on the App Store, which Apple argues is because they allow access to content that the company isn’t able to individually review.

“The App Store was created to be a safe and trusted place for customers to discover and download apps, and a great business opportunity for all developers,” Apple wrote in a statement about the situation last week. “Our customers enjoy great apps and games from millions of developers, and gaming services can absolutely launch on the App Store as long as they follow the same set of guidelines applicable to all developers, including submitting games individually for review, and appearing in charts and search.”

However, Apple doesn’t seem to push the same requirement of reviewing every piece of content individually for streaming services offering other types of media, such as Spotify’s music catalog or Netflix’s movie and television library. Also, it’s hard not to wonder if the issue, in part, isn’t that services like xCloud and Stadia compete with Apple’s own gaming efforts in Apple Arcade. (Apple has its own movie and music offerings as well, but they are far more established entities.)

Now, on one hand, I do think it’s fair for Apple to be calling out Epic for seemingly wanting to play under a different set of rules than all other software developers have to. On the other hand, though, there is some irony in Apple calling out Epic Games for trying to avoid the fees associated with a digital store while they do the exact same thing on Android.

As pointed out on Reddit, Apple built a feature into the Android version of Apple Music that requires users to set up a specific method of payment. Through this, all payments go directly to Apple, instead of going through Google first, who would then take out its 30-percent share. The big difference between the two is that Google’s terms of service allow for this, while Apple’s do not—but it’s still humorous that Apple is directly doing what it’s now accusing another company of doing.

Who isn’t laughing is Epic Games. The company no doubt knew what would happen as a result of the Fortnite Mega Drop announcement, and it’s possible they even wanted it to happen. While many companies have been fighting with Apple’s policies as of late, Epic is big enough to turn it into a full-fledged battle.

And, it seems that’s exactly what’s happening, as following Apple’s actions, Epic quickly announced that it has put together an anti-trust filing against the company.

One especially interesting part of the filing is that this doesn’t just seem to be about Fortnite for Epic.

16. Epic—and Fortnite’s users—are directly harmed by Apple’s anti- competitive conduct. But for Apple’s illegal restraints, Epic would provide a competing app store on iOS devices, which would allow iOS users to download apps in an innovative, curated store and would provide users the choice to use Epic’s or another third-party’s in-app payment processing tool. Apple’s anti-competitive conduct has also injured Epic in its capacity as an app developer by forcing Epic to distribute its app exclusively through the App Store and exclusively use Apple’s payment processing services. As a result, Epic is forced, like so many other developers, to charge higher prices on its users’ in-app purchases on Fortnite in order to pay Apple’s 30% tax.

From how that section reads, this might not just be about payments in Fortnite—it could also be about Epic Games wanting to create its own app store on Apple’s iOS platforms. Which, of course, is a far cry from the argument that this is a battle over Fortnite being treated unfairly by Apple.

And yet, that’s exactly the angle Epic seems to be pushing. As I’ve been writing this, the company has just launched a #FreeFortnite campaign, complete with a webpage running down what’s going on, and a new video mimicking Apple’s famous “1984” Super Bowl commercial of the Macintosh. The video has run at least once in Fortnite‘s Party Royale mode so far, but as of this moment, I’ve not yet been able to see it in-game for myself. (Update: The video is now accessible from the game’s main menu.)

You can, however, watch it here:

If nothing else, it’s now clear that Epic was indeed ready and waiting for some sort of negative response from Apple. In that, if I’m being honest, there’s something uncomfortable about appealing to Fortnite‘s young players to get involved in what is basically a battle between two huge corporations over who gets to keep more money.

As of this moment, that seems like the entirety of the story so far—but as today has been filled with twist and turns in this saga, we’ll update this article as necessary.

Update (8/13/20 5:16PM): According to The Verge, Google has now removed Fortnite from the Google Play Store for Android. As part of the story, Google released the following statement:

The open Android ecosystem lets developers distribute apps through multiple app stores. For game developers who choose to use the Play Store, we have consistent policies that are fair to developers and keep the store safe for users. While Fortnite remains available on Android, we can no longer make it available on Play because it violates our policies. However, we welcome the opportunity to continue our discussions with Epic and bring Fortnite back to Google Play.

However, unlike on iOS devices, apps can still be downloaded directly on Android, and Fortnite is still available directly from Epic.

Update (8/13/20 06:15PM): Well, it looks like Epic Games has now filed suit against Google as well. I haven’t been able to confirm the filing for myself yet, so will provide more solid proof once I can find it.