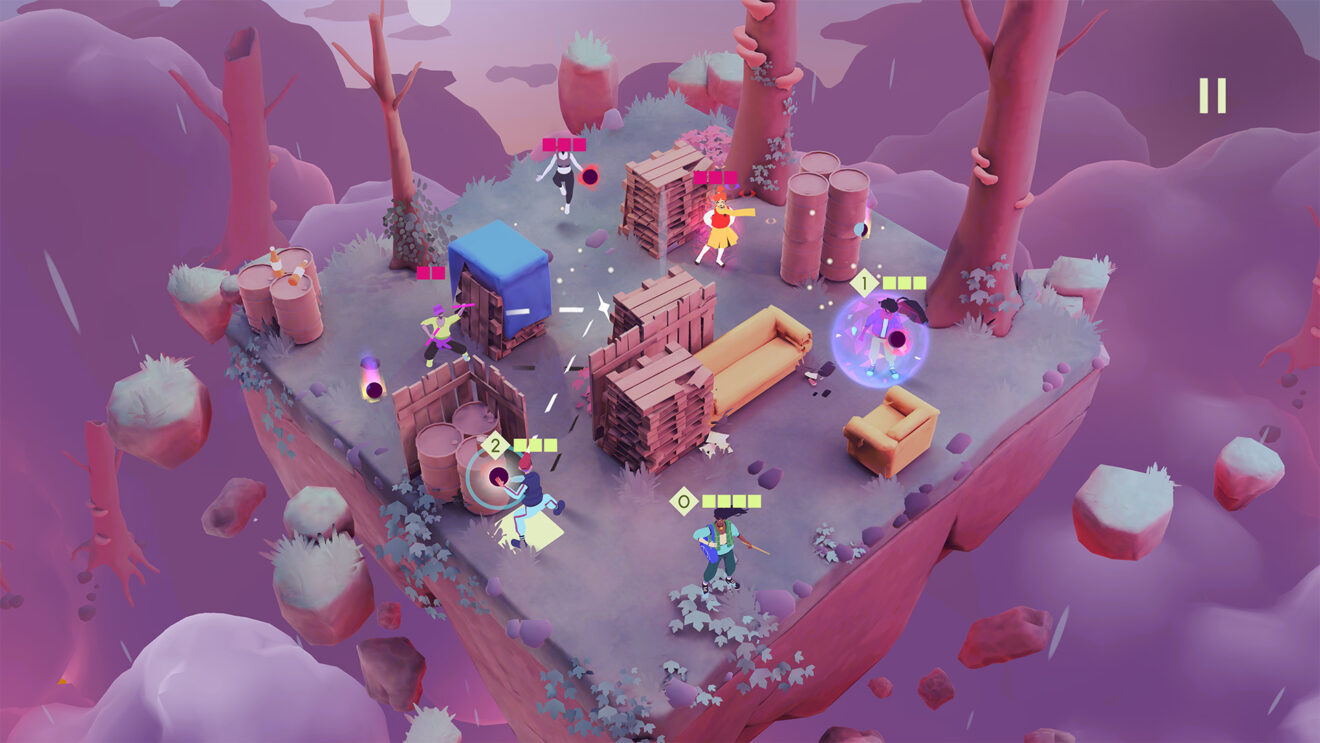 Day of the Devs hands-on: Bite-sized impressions of 8 great indies

As part of the Summer Game Fest Play Days event, I got to go hands on with seven (and eyes on with an eighth) of the games featured during the Day of the Devs livestream. Sadly, I only got a few minutes with each game—not nearly enough time to get a substantial feel for them.

Still, I wanted to share my biggest takeaways from the time I spent with each game, however brief. Take a look, see if any of these games sound appealing to you, and seek out more info if you find some that excite you.

Desta: The Memories Between

Given that usTwo revealed Desta: The Memories Between as a narrative roguelike, turn-based tactics game with sports elements, I understandably had a lot of questions about how it would actually work. And while I didn’t get to play it myself, I did get to watch usTwo’s Mike Anderson play through some (not quite) combat and talk to me a bit about how it all works.

During “battles,” you’ll navigate Desta and their allies on a grid to pick up balls you can toss at “enemies.” (Okay, I’ll drop the scare quotes, but the premise is about using the tactics levels to find the right things to say to Desta’s friends and family, so just keep in mind that the dodgeball/combat metaphor isn’t literal.)

Though the tactical side of the game seems fairly robust—with things like positioning your team behind cover, action points, stat upgrades, and special powers—Anderson told me one big change they made from more hardcore, XCOM-style games is removing randomness from your attacks. On the iPad, you just drag and release to toss the ball, with a dotted line showing the course your throw will take (including ricochets). That tactile element should make the game as accessible as something like Angry Birds to casual gamers, while still presenting them an opportunity to learn deeper systems and strategy.

As for the roguelike element, Anderson said that the game will mix up the layout of the battle arenas, as well as the powers you’ll unlock as you progress, each time you play. Some upgrades can apparently also be made permanent, so repeated attempts will make you powerful enough to overcome challenging fights, even if you’re not the most skilled tactician.

Desta: The Memories Between is a multiplatform release, but no launch platforms or release window have been confirmed yet.

The announcement trailer for Time Flies really tells you all you need to know, but here’s the gist: You’re a fly. You only have a short time to live, with your lifespan determined by the average life expectancy in your country, only in seconds instead of years. You explore the house you’re born in and try to accomplish as much as possible from your bucket list before time runs out.

Even after buzzing my way through a few lives, I’m still not entirely sure what Time Flies is trying to do beyond the obvious. Though I ticked off a few list items, I’m really not certain if it’s possible to do them in one single life (even if you do like I did and lie about being Japanese to get those precious extra seconds of life). Since your progress doesn’t carry over when you die, it’s still a bit ambiguous what “finishing” the game would look like. Maybe the point is to speedrun through life doing as much as possible? Maybe it’s realizing you actually can’t do it all, and choosing to focus on what tasks will feel the most satisfying.

That ambiguity is obviously a positive for an experience that wants you to reflect on your own mortality. But as far as games go, it’s also seems to be a confection rather than a full meal.

Time Flies is coming to PlayStation 5, Switch, PC, and Mac.

Birth is a promising point-and-click puzzler that manages to feel both creepy and cozy at the same time. The work of solo developer Madison Karrh, the game tasks you with exploring a city and solving puzzles—all intuitively and without any explicity instruction—to collect bones and organs so you can build yourself a friend. The people you encounter, if you can even call them people, have unsettling and otherworldly skull heads, but I didn’t encounter any actual danger during my playthrough. They may look a bit scary, but they seem to just be getting by like the rest of us. One lady just wants some eyeballs to hang on her string. Another just wants to drink a refreshing cup of teeth and spiders.

Karr told me the game is partly autobiographical—she moved to Chicago shortly before the pandemic began, and Birth‘s themes of loneliness reflect her experience. (I didn’t ask if she had attempted to build a friend out of organs and bones, but no judgment either way. COVID hit us all differently.) This definitely felt like a game I’d enjoy finishing after it launches—though I might have to limit myself to playing during daylight hours.

Birth is planned for a fall 2022 release on PC and Mac.

Roots of Pacha may be most directly inspired by Harvest Moon, Stardew Valley, and similar games, but I think the most interesting parallel is to The Oregon Trail. In transmitting the farming sim genre to prehistoric times and basing its mechanics on what we understand about the development of early agricultural societies, developer Soda Den has a chance to make a game that’s educational without being boring or didactic. Teaching players about domesticating animals and wild plants by letting them have fun seems like a great thing. Sure, there looks to be some creative license—I tried to get a wild boar to trust me by playing the flute, and at one point I think I magically transformed into an armadillo—but the important concepts are definitely grounded in reality.

I’m definitely curious to learn more about the game. If you are too, you can grab a new demo on Steam.

A Little to the Left

A Little to Left is one of those games that doesn’t really require much in the way of explanation from me. If you’ve seen the trailer, you probably get how it plays out—as a series of sorting and tidying puzzles that don’t require any explanation, just some exploration. Solving them was about as chill and intuitive as you might expect, with one small exception: When I had to arrange sticky notes in order, I didn’t realize they had to be placed in a specific spot on the screen to snap into alignment. Other than that, everything worked perfectly, no instruction necessary.

What makes the game particularly intriguing to me, is that the two-person team at Max Inferno games have given some puzzles multiple solutions whenever more than one way to sort might make sense. Books for instance, can be sorted by height or by width.

The game is out later this year on Switch, iOS, PC, and Mac later this. There’s a demo on Steam, too.

It feels like a bit of a crime that I got to spend so little time with Animal Well, an exploration-heavy pixel-art sidescroller from solo developer Billy Basso. All I could really appreciate during my short demo was the art style, which does a great job blending an old-school resolution with more modern lighting effects. The game just seems to glow.

Unfortunately, it’s also the kind of experience you need more than a few minutes with to fully appreciate. Basso told me his goal is to make a secret-dense game like Fez and Tunic, where players can simply beat the main path but also dig deeper to find solve well-hidden puzzles. I don’t have much sense of how these puzzles might work or the tools players will unlock to help solve them, but my first taste was an intriguing one.

Animal Well is slated for eventual launch on PlayStation 5 and PC.

SCHiM seems an absolutely genius concept: You’re a shadow creature who can only navigate the world by leaping between the shadows cast by objects, people, and animals. And while my gameplay demo matched the trailer pretty exactly, I do wonder how well the idea will translate to a full game. I played through a few different environments, and I never really found that one moment that can make a gameplay experience click. Sometimes it felt like I was playing a very low stakes platformer—if you miss a shadow, you have an extra jump to get back into the shade before you’re booted back to a checkpoint. Sometimes it felt like I was playing a puzzle game, having to figure out what interaction would let me advance to where I was going. But the game never really felt wholly committed to either option.

I’d be curious to see how the final game actually strings everything together to feel more cohesive and engaging. Certainly more complex challenges that test my reflexes or problem-solving could help, but so could more playful ways to interact with the world around me, a la Untitled Goose Game. I just didn’t find that spark in the demo, but that doesn’t mean it’s not there, or it won’t be eventually.

Bear and Breakfast, a hotel building and management game from Romanian studio Gummy Cat, isn’t really my usual vibe, but I can appreciate what it’s doing. I got a chance to briefly explore the world, build the first room in my bed and breakfast, and place a bed inside. I like the idea that it’s not just a pure building-and-management sim; you control Hank, the titular bear, directly and move him around the world to talk to various animal characters. There’s also a narrative involving humans returning to the woods, though I was assured Hank is not trying to eat them or exact revenge for what they’ve done to nature.

Bear and Breakfast seems like it should appeal to anyone who got sucked into Animal Crossing: New Horizons‘ Happy Home Paradise DLC. It’s out July 28th on Switch and Windows PC. 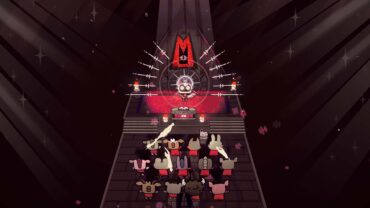