When it comes to the visual arts, I’m an idiot. I don’t just mean that I draw or paint on the level of a fourth grader—though that’s certainly true. What I mean is that I don’t really grasp the underlying philosophy of the art world. I can’t tell you why Andy Warhol was a genius for creating images designed to be reproduced in bulk but Thomas Kinkade was a hack for doing the same. I can’t explain how Damien Hirst can bedazzle a skull or put a shark in formaldehyde and make millions while brilliant figurative painters are stuck exchanging their work for Reddit karma. I’m sure I could dredge up some Barthes or something from my college days, but I’m not sure I really feel any of that. Mostly, I suspect, I’m blindly following the lead of some art world gatekeeper I’ve never even heard of. Not just an idiot, then. A lemming, too.

All that is to say I found Concrete Genie, the new PlayStation 4 exclusive from Pixelopus, refreshingly naive in its approach to art. This is a game about art, but the most idealized, big-tent, Bob Ross version of the idea—an art that everyone can and should make and enjoy, free of judgment or critique. Playing as Ash, a young boy with a passion for sketching and painting, you’re tasked with bringing color and hope back to the abandoned fishing village of Denska, which has collapsed in the wake of an environmental catastrophe and now finds itself overrun with “darkness,” a black-and-purple mixture of goo and thorny tendrils symbolizing, and perhaps literally caused by, the negative emotions of the town’s former inhabitants.

To make a long, hand-waving story much shorter, some local bullies rip the pages from Ash’s sketchbook, and he soon finds himself in possession of a magical paintbrush that lets him adorn every wall he encounters with glowing technicolor art. To unlock new designs, he’ll need to track down the lost pages from his notebook. At specific locations, Ash can also paint and bring to life cartoon monsters—the eponymous genies, who do not appear to have anything at all in common with their mythological counterparts. After you bring them to life picking between body types and attachments like horns and tails, the genies rove around on walls and help out with light puzzle solving. The three types—red for fire, yellow for electricity, and blue for wind—are all predetermined by location and have a single ability totally unrelated to whatever design you cook up. They’re functionally just there to be cute and flip switches to help you advance.

Painting designs and genies is fairly intuitive no matter which control scheme you choose. (The default uses the DualShock 4’s motion controls, but you can also swap to the right stick if you’re more comfortable with that.) All you do is press R2 to switch into painting mode, select the object you’d like to paint from a menu, point your cursor at the wall, hold down R2, and then move the cursor to paint.

The various (non-genie) designs behave differently, but all in a way that feels intuitive and reasonable. Stars and auroras, for instance, will streak across the wall indefinitely. Plants have a maximum length, and the ground will rise up to meet their base. Suns and moons extend outward from the center of your cursor to a maximum size. With a little practice, it’s easy to create attractive landscapes full of rich detail far beyond your actual artistic ability. It’s also easy to go overboard, and make a jumbled, nonsensical mess that no human being could possibly enjoy looking at. This is doubly true of the genies—in the absence of any real limits, I found myself accidentally making creatures that were less Maurice Sendak and more H.P. Lovecraft.

But the game isn’t interested in evaluating your art. It only cares that you’re painting something. Outside of a handful of more guided painting segments, there’s no reason (beyond simple aesthetics) that you can’t quickly paint the same object over and over again instead of taking minutes to lovingly craft a scene. As fundamental as that approach is to Concrete Genie’s underlying philosophy, it’s also by far the biggest stumbling block in building out the core ideas into a compelling game. Everything just feels slightly aimless. Yes, there’s a loose and fairly straightforward structure. You platform around to explore the city. You paint on specific walls adorned with strands of lightbulbs, and once you’ve illuminated all the lights in a given area, some patch of darkness blocking your progress will be burned away, allowing you to proceed onward. Sometimes you’ll need to clear out darkness first using “Super Paint,” which you earn by making a genie happy. (Usually this is a matter of playing a ludicrously simple round of Simon Says, throwing up one of whatever object they request with a speech bubble, then waiting for them to top off your meter.) Sometimes you’ll need to figure out an additional puzzle to move a genie to whatever it needs to burn or shock or blow to open up your path, but mostly getting them to you is a simple matter of calling them over by holding down L1 and waiting patiently.

These genie puzzles are, disappointingly, the only times the things you paint will ever really impact the outside world. I’d love a version of the game in which drawing a campfire near something flammable in the real world causes it to burn, or snowfall causes a patch of otherwise impassable water to freeze, or you have to smartly draw the ground so your genies can navigate the 2D world as you move through the 3D one. But there’s none of that here. You paint where you’re told, and sometimes what you’re told, but only ever in service of progressing the story and clearing out progression blocks. There’s a lack of playful experimentation or real interactivity. The game hinges on the idea that your painting ability is magical, and the first few times you effortlessly conjure a brilliant mural from nothing, that magic is real. But when you realize the limitations of what you create, both in your ability to express yourself and its impact on the world, any sense of wonder quickly fades.

Even within the self-contained world of your paintings, there’s a lack of ambition compared to what Sony showed in the earliest demos. When the game was first announced, you could paint a waterfall that would fill up a lake, and then dot it with rocks and lily pads. Anything remotely dynamic in that vein has seemingly been cut from the final game.

Concrete Genie also includes a short experience making use of the PlayStation VR headset and two PlayStation Move controllers. The focus of the VR mode is a short guided segment called Splotch and the Crystal Canvas, which starts out with the same 2D painting as the rest of the game before shifting into a meadow where you can paint in full 3D. This transition, aided by the inherent immersion of VR, is far more striking than anything in the base game, as you summon trees and grass and bamboo all around you. There’s even more of the interactivity the standard 2D painting is so desperately missing—it’s neat to paint a sun and see the world transition from night to day. If you’ve got a copy of the game and a PSVR, it’s definitely worth trying out, though don’t expect much in the way of length.

Pixelopus appears to understand that the simplistic loop of Concrete Genie isn’t really sustainable. Timed generously, the game clocks in at around 4 hours, and I was able to breeze through over half the story in under an hour on a second playthrough, a good chunk of that time coming from unskippable cutscenes. In an effort to complicate your progression, some sections do mix things up by bringing back the bullies for uninvolved stealth gameplay. But all you need to do to avoid getting caught is hop onto the nearest rooftop. Push the limits, and it becomes clear you don’t actually need to worry about being stealthy in the slightest. I know this is a game designed to be accessible to younger audiences, and that it’s not a full-priced title, but neither of those things are a great excuse for dumbed-down gameplay.

In what feels like an admission that the central design ideas have run their course, more than halfway through the game, Concrete Genie suddenly introduces simplistic combat against blobs of darkness called minions and corrupted versions of your genies. At this point, the game pivots almost exclusively to combat encounters, pushing you towards a final boss fight that feels entirely disconnected from the first half of the game. The four-button combat—three attacks and a dodge—is just as brainless as the earlier stealth. And after you’ve beaten the finale, these enemies and any trace of combat disappear from the small open world as you track down the rest of the pages and secrets for completion, like they never even existed in the first place. It’s an absolutely bizarre structural decision, the likes of which I’ve never seen in a game of this profile.

Concrete Genie wants to sell the idea that art is akin to hope, that it’s a salve we can use to heal the pain we suffer in the real world by creating and appreciating beauty in a space removed from reality. But it’s the frame that proves to be the problem. Pixelopus can’t seem to find a way to make what happens inside your art impact what goes on outside the walls in any meaningful, stirring way. You make some pretty things, you flip some glorified switches, you shoot some fireballs, and in the end, your victory is just a 2D cutscene, as detached from your experience as what you’ve painted on the walls. Load back into the game proper, and you’re left wandering around a Denska that’s as empty as it was when you started. You’ve spruced it up a bit, sure, but when every wall is drenched in the same color and light, they all blur together into one forgettable mass. Maybe that’s the price we pay when everything can be art. Maybe those gatekeepers have a point after all. 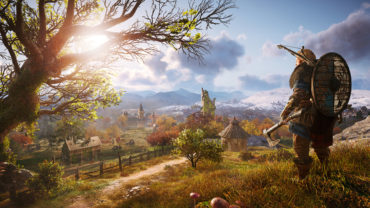